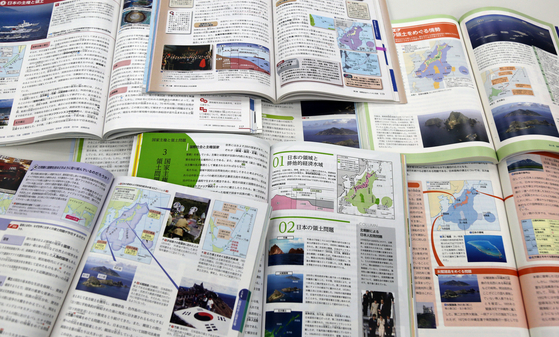 Japan renews its claim over Korea’s easternmost Dokdo islets in high school textbooks approved by the Japanese Education Ministry Thursday for use next year. [YONHAP]

All 30 textbooks in three social science subjects, including general history and geography, that passed the Japanese government's latest screening generally contained terminology asserting claims over Dokdo, which is called Takeshima by Tokyo.

Japan's Ministry of Education, Culture, Sports, Science and Technology announced the results of a review by a textbook-screening committee that authorized 296 high school first-year textbooks for the 2022 school year.

The six approved comprehensive geography textbooks all included content that described Dokdo as being "an inherent territory of Japan" or that Korea is "illegally occupying" the islets. The other 24 social science textbooks contained similar language.

Five years ago, some 77 percent, or 27 out of 35 textbooks in social studies authorized for high school students in 2016, contained text that Dokdo is Japan's "inherent territory" or that Korea is "illegally occupying" it.

Seoul maintains that there is no territorial dispute as its easternmost Dokdo islets are historically, geographically and under international law an integral part of Korean territory. The Dokdo islets, effectively controlled by Korea, also serve as a painful reminder of Japan's imperialistic past and its 1910-45 colonial rule over the peninsula.

Tokyo's newly approved social studies textbooks are in accordance to revised guidelines revealed by the Japanese government on March 30, 2018, reinforcing territorial claims and instructing students to be taught that the Dokdo islets and Senkaku Islands, which China calls Diaoyu, are a part of Japan's territory. The revisions were scheduled to start in phases, beginning with high school students in 2022.

Thus, the latest social science textbooks appeared to reflect the newest guidelines in order to get authorized.

In contrast, there were less passages referring to the issue of the Japanese military's forceful recruitment of girls and young women into wartime sexual slavery. Some textbooks completely omitted reference to the so-called comfort women issue.

The Korean government "strongly protests" that the Japanese government approved of textbooks that spin history to its own perspective and "do not state the facts as they are," said Seoul's Foreign Ministry Tuesday, urging Tokyo to "correct this immediately."

Choi Young-sam, the ministry's spokesman, said in a statement that Seoul "strongly condemns" the Japanese government for again approving of textbooks renewing "empty claims over Dokdo, which is clearly our territory."

He went onto urge the Japanese government to "accurately recognize" the true nature of the issue of the Japanese military's enforcement of sexual slavery, which was a "violation of women's rights in wartime and of universal human rights." Choi encouraged Tokyo to engage in "relevant history education based on the spirit of responsibility, repentance and self-reflection."

Choi stressed that youth education is the foundation for building a more constructive, future-oriented relationship between Korea and Japan, adding he "looks forward" to the Japanese government educating its students in a "more responsible manner."

The Korean Foreign Ministry summoned an official from the Japanese Embassy in Seoul later Tuesday afternoon to lodge a protest.

Korean Education Minister Yoo Eun-hae likewise said Monday ahead of Japan's textbook review, "I am aware there will be problems including the Dokdo issue and distortion of history, so related ministries and agencies will protest and respond strongly."