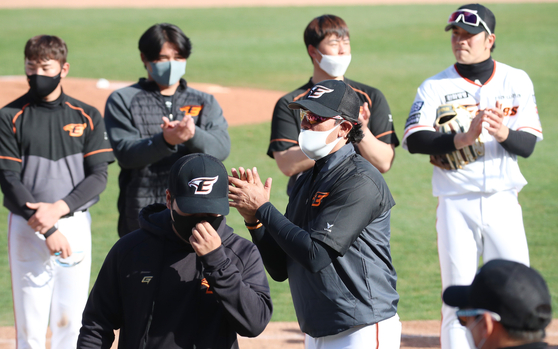 Hanwha Eagles Manager Carlos Subero applauds his team after the Eagles beat the Kiwoom Heroes in their final exhibition game on Tuesday. [NEWS1]

After playing the seven of their ten exhibition games that were not canceled due to rain or pollution, the Eagles are sitting at the top of the spring training table with six wins and one loss. As the Eagles finished the 2020 season in tenth place and 2019 in ninth, a first place finish is pretty exciting stuff.

Unfortunately for the Daejeon club, spring training doesn't actually count and the maximum ten warm up games don't offer an especially accurate barometer of how a team will perform over the full 144 game season.

Yet while their spring training success may not mean Hanwha are destined to dominate the 2021 KBO season, it is a promising sign for a team that has big plans for this year. The Eagles are shaking things up with a comprehensive international staff led by former Milwaukee Brewers bench coach Carlos Subero, with American hitting coach Johnny Washington and bench coach Darryl Kennedy, and U.S.-born Puerto Rican pitching coach Jose Rosado.

The team is so confident in this rebuild that they've partnered with streaming service Watcha to follow the team for this season and produce a behind-the-scenes documentary series. Dominating spring training is definitely a good way to start that rebuilding process.

While the Eagles have romped to the top in spring training, the NC Dinos and Doosan Bears, last year's first- and second-place teams, have taken a tumble.

The Giants had four wins and two losses as of press time.