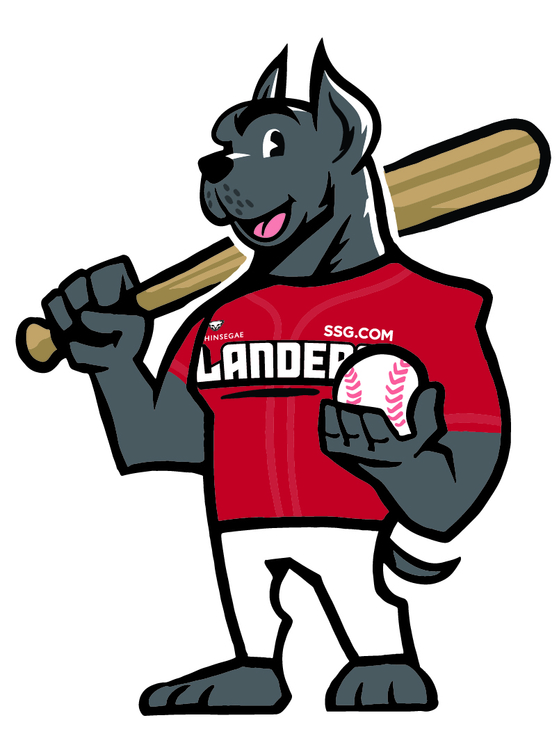 
The SSG Landers finally got a uniform and a mascot on Tuesday, as new owners Shinsegae Group held an inauguration ceremony for the rebranded team ahead of the start of the 2021 season on Saturday.

Three Landers uniforms were unveiled at the ceremony at the Westin Chosun Hotel, as well as new mascot Landy and the team's new cheer song. Like the SK Wyverns before them, the Landers will have an Incheon-branded uniform, as well as their home and away jerseys. 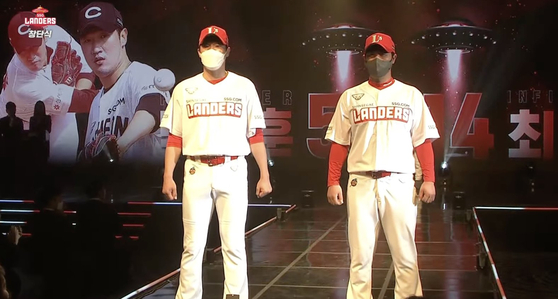 
The Landers' home uniform is a white jersey and pants with bright red lettering, a red belt and a red cap with a white "L." The away kit swaps the white jersey for a red one with white lettering. 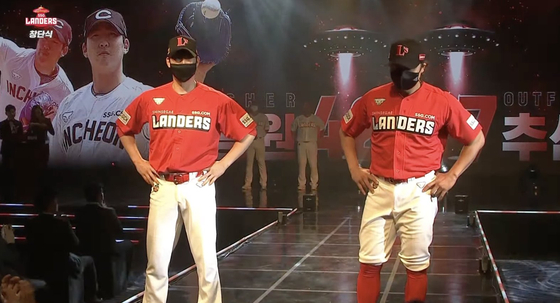 
The Incheon uniform is white with dark lettering. Both the Incheon and away uniforms swap the red "L" caps and belts for what appear to be black versions. 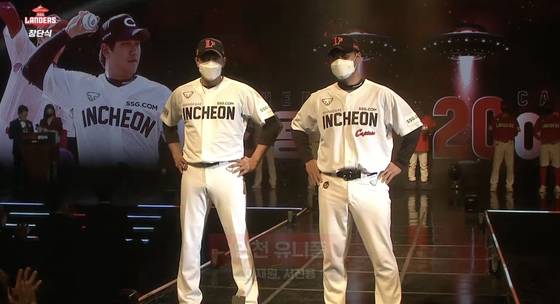 
As well as SSG.com, Shinsegae and Emart, other brands owned by the company are visible on the uniform, including Electro Mart and Peacock.

While SSG have fully embraced the out-of-this-world image of the Landers name, the club chose not to recruit a little green man as the team's new mascot. Electro Mart mascot Electroman was also snubbed in favor of Landy, a surprisingly muscular dog.

Landy, according to Shinsegae, is a Cane Corso, a breed known for its bravery and loyalty. Landy was chosen as the new canine best friend for both the players and fans. The mascot wore the club's new uniform on stage, although images shared by Shinsegae suggest he may have a larger wardrobe that includes a pilot's uniform.

Shinsegae also unveiled the team's new cheer song "We are the Landers," which according to the company is an energetic track that builds up to "get the fan's blood boiling."

As well as the Landers squad — including former major leaguer and recent edition Choo Shin-soo, who modeled the away uniform — and officials, a number of senior executives from Shinsegae attended the event. Both Choo and Landers Manager Kim Won-hyung spoke at the event.


“It is a great honor to be the first manager of the SSG Landers," Kim said. "Since January, we have done our very best to be in top shape before the start of the season. We will work hard this season to achieve our goal”.

Shinsegae Group Vice Chairman Chung Yong-jin, a keen baseball fan, also spoke at the event, thanking the city of Incheon for welcoming the new owners of the baseball team.

"Shinsegae Group will always remain your strong supporter until the very last game of the season.”

Landers could be the team to beat this season