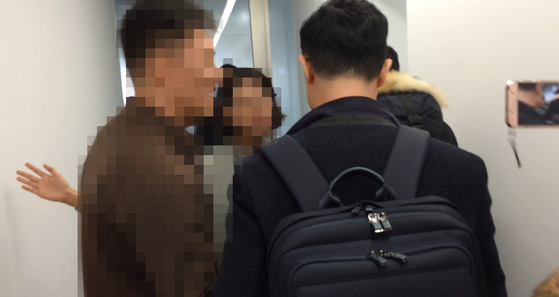 Apple Korea officials including a senior manager, left, block the entry of FTC agents to their office in 2017. The FTC referred the case to the prosecution, a first for the regulator for this sort of infraction. [FAIR TRADE COMMISSION]

Apple pulled the plug on its intranet, blocked the door and physically restrained an investigator when the Fair Trade Commission raided the offices of the smartphone maker in 2016 and 2017, the regulator said.

The FTC is fining the company for interfering with its investigation and has referred the case to the prosecution, a first for the regulator for this sort of infraction.

Apple was being investigated for using its market position to force local telecommunication service providers to shoulder marketing and repair costs.

According to the Korean antitrust agency, Apple Korea disconnected its internal network in June 2016 when FTC agents visited its office in Samseong-dong, southern Seoul. The FTC claimed that the global smartphone maker did not turn on the network during the field investigation, which lasted more than a week, preventing access to key data.

In November 2017, an executive of Apple Korea pulled the arm of one of the FTC agents and physically blocked the agent from entering the office.

Apple Korea was fined 300 million won ($265,000) by the FTC for obstruction and the executive accused of frustrating access was reported to the prosecution.

Anyone preventing civil servants from performing their duties can face up to 3 years in prison and a fine of up to 200 million won.

This is the first time the FTC turned over a case to the prosecution for charges related to blocking or stalling an investigation since the offense became a criminal charge in 2012.

"We have fully cooperated with KFTC, and neither Apple nor any of our employees did anything wrong.  We follow the law wherever we operate and strongly disagree with KFTC in this case. We look forward to sharing the facts with the authorities," Apple Korea said in a statement.

According to the regulators, agents made their first visit to Apple Korea’s offices on June 15, 2016 and remained on site through June 24. While there, they requested all electronic records be preserved, warning the company that the hiding, changing or deleting of records would be a violation of the law.

During the visit, Apple Korea disconnected its intranet, and the FTC claims it wasn’t able to access the Apple Marketing Funds Tracker (AMFT) and the “meeting room,” where information on the approval status of advertisement proposals by local telecommunication service providers was located.

On three occasions, the FTC requested Apple Korea explain the network disconnection, but the requests were disregarded.
A second investigation was conducted Nov. 20 to Nov. 23, 2017. On one occasion, a senior manager physically blocked the entry of the office and prevented investigators from doing their job.

The FTC said the manager was the highest ranking company employee on site and had the authority to make decisions regarding access to information and cooperation with the investigation.

A 200-million-won fine was levied for disabling the network and 100 million was charged for failure to provide documents requested.

In February, the FTC approved Apple’s proposal that it cover marketing and repair costs and said it would not be punishing the company for its earlier shifting of costs.

The U.S. company also agreed to finance an academy for tech developers and an R&D center for small Korean businesses.

Under the agreement with the FTC, Apple agreed to pay a total of 100 billion won ($86 million). From that total amount, 25 billion won will be used to cover the costs of AppleCare extended warranties.

The FTC estimates that the trickle-down benefit to customers will be 20,000 to 30,000 won each