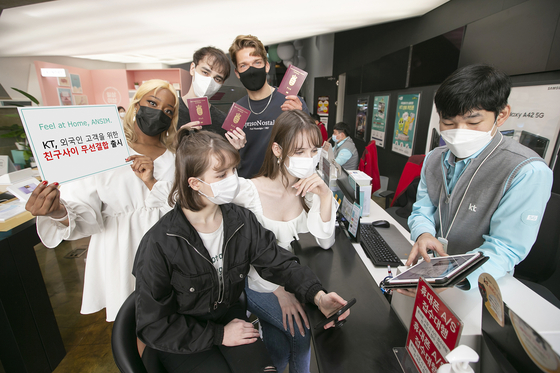 
KT is rolling out a discount service exclusively for its foreign customers, the mobile carrier announced Wednesday.

The service allows foreigners to receive discounts when they register for a phone plan with four other friends or acquaintances of the same nationality.

Up to five foreigners can apply for the plan through Sept. 31, and each subscriber will be offered a discount of up to 11,000 won ($10) per month for two years.

No additional documents are required other than each applicant's alien registration card.

While Korean subscribers are eligible for family plans, which include discounts and benefits such as shared data, foreigners were exempt from such services as many of their families are living overseas. KT aims to offer similar benefits to foreigners by allowing them to apply for the plans with their friends instead.

KT runs its own customer centers that allow customers to receive consultation in English, Chinese, Vietnamese and Japanese. Starting May, customers will also be able to receive the service in Russian.


The customer center will play a critical role in helping relieve foreign customers' inconvenience, as some 80 percent of foreigners in Korea speak English, Chinese, Vietnamese, Japanese or Russian, according to KT.

On top of that, KT operates a total of 157 Global Stores across the country which have employees on standby who can speak multiple languages. The company is looking forward to increasing the number of its global stores continuously by the end of the year.

“KT will do its best for our foreign customers so that they can feel like they are subscribing to a mobile carrier of their own country,” Park Hyun-jin, head of KT’s customer strategy team, said.