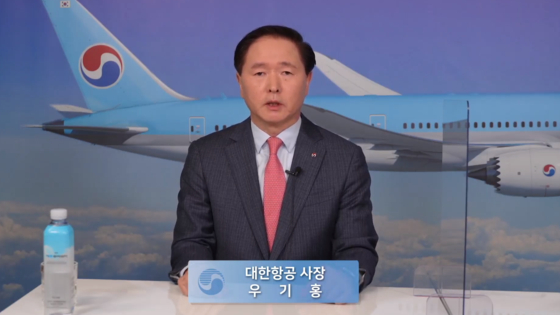 
In 2024, Korea will have a single full-service carrier, one Korean Air Lines.

Asiana Airlines will start as an independent subsidiary of the carrier when the takeover is complete, and over the following two years, it will be absorbed by the acquirer so that only a single brand remains, according to Korean Air Lines President Woo Kee-hong on Wednesday.

He promises that the mega carrier will not use its dominant position to raise ticket prices.

Woo announced the plans two weeks after the company submitted a post-merger integration report to the Korea Development Bank (KDB) on March 17. The bank provided funding for the transaction and in the process has become a major shareholder in Hanjin KAL, which owns 28.54 percent of Korean Air Lines.

Jin Air, which in controlled by Hanjin KAL, will be merged with Air Seoul, which is fully owned by Asiana Airlines, and Air Busan, which is 41.2 percent owned by the carrier. A single mega budget carrier will be formed, which could be controlled by Korean Air Lines or Hanjin KAL.

“For the merger of Korean Air Lines and Asiana Airlines, many projects need to be worked on, like integrating various systems, from safety aviation to IT, accounting and frequent flyer programs, as well as the handling of global alliances,” said Woo on Wednesday, adding that careful reviews of various issues, like the opinions of authorities on the merger and issues related to company shares, are required for the integration.

Woo did not provide details on how the mileage system will be integrated. He said it’s difficult to understand the total accumulated points and transactions amounts due to “legal restrictions.”

Korean Air Lines has to win the approval from regulators in nine countries. It obtained the green light from Turkey in February.

“It is progressing smoothly. But it’s difficult to be certain on when the approvals will be given,” Woo said.

The president reiterated that Korean Air Lines won’t raise ticket prices using its market share as leverage. He said an airline needs to gain permission from the government for ticket price changes, and it will be competing with global airlines, not just domestic carriers.

Korean Air Lines announced the plan to buy Asiana Airlines for 1.8 trillion won ($1.6 billion) with the help of the KDB in November.