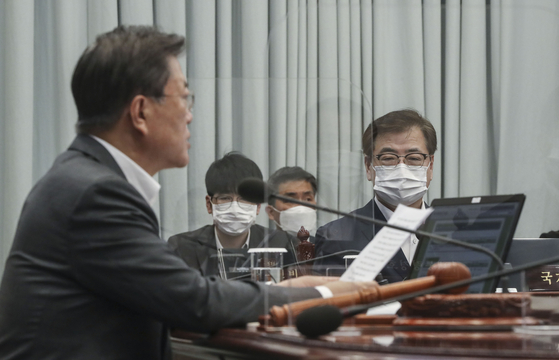 Suh Hoon, right, director of the National Security Office, listens to President Moon Jae-in at an interagency meeting at the Blue House Tuesday. Suh departed Wednesday for a trilateral meeting with his U.S. and Japanese counterparts Friday in the United States. [JOINT PRESS CORPS]


President Moon Jae-in’s national security adviser will travel to the United States this week to talk with his U.S. and Japanese counterparts about North Korea, the Blue House confirmed Wednesday.

The Blue House noted that this will be the first visit by a high-ranking South Korean to the United States since the launch of the Joe Biden administration, and “an opportunity to confirm the robustness of the South Korea-U.S. alliance.”

The security advisers are expected to exchange opinions on a nearly final U.S. review of North Korea policy and on ways to promote cooperation among Seoul, Washington and Tokyo, said the Blue House.

The Blue House said Suh will separately hold talks with Sullivan to discuss a range of bilateral, regional and global issues such as the South Korea-U.S. alliance and coordination of North Korea policy. Suh will also hold talks with Kitamura to discuss bilateral cooperation between Seoul and Tokyo, it added.

On Wednesday morning, Suh departed for New York from Incheon International Airport accompanied by officials including Kim Hyung-jin, the second deputy chief of the NSO, and Kim Choon-goo, the presidential secretary for peace planning.

Suh will initially meet with South Korean Ambassador Lee Soo-hyuck to the United States in New York to receive a preliminary report on the North Korean policy review underway by the Biden administration and to coordinate the South Korean government's position to convey to the White House. Suh, a former director of the National Intelligence Service, has played a role in arranging past inter-Korean summits.

The Blue House said that Suh’s visit to the United States is expected to “contribute to the establishment of a coordinated and realistic strategy on North Korea policy, a strengthening of the bilateral alliance, and increased cooperative relations between South Korea and the United States and Seoul, Washington and Tokyo on global issues."

The White House National Security Council (NSC) said in a statement Tuesday that the trilateral meeting Friday “provides an opportunity for our nations to consult on a wide range of regional issues and foreign policy priorities, including maintaining peace and stability on the Korean Peninsula, addressing the Covid-19 pandemic, and combating climate change.”

This marks the first multilateral dialogue of national security advisers since the start of the Biden administration, the White House said, “reflecting the importance we place on broadening and deepening our cooperation on key issues and advancing our shared prosperity across a free and open Indo-Pacific.”

However, Seoul and Tokyo's ties are seriously strained over history disputes and a trade spat, hindering the Biden administration’s hopes for closer trilateral cooperation with its closest allies in the region.

Washington has been coming down on Beijing over its assertiveness in the South China Sea and human rights abuses, a message reinforced by U.S. Secretary of State Antony Blinken and Secretary of Defense Lloyd Austin in their visits to Tokyo and Seoul in mid-March. Unlike Japan, a member of the Quadrilateral Security Dialogue, or Quad, a security cooperation mechanism also involving the United States, India and Australia and seen as a way to contain China, South Korea has been hesitant to take sides in the rising Sino-U.S. rivalry, aiming to maintain a balanced position.

South Korean Foreign Minister Chung Eui-yong will make his first trip since being appointed Seoul’s top diplomat later this week. He will travel to China.

In his first press conference at the Foreign Ministry in Seoul Wednesday, Chung stressed that both the United States and China are essential to South Korea.

“The United States and China are ultimately not a matter of choice for us,” said Chung. “Furthermore, neither the United States nor China has made such a request to us.”

He added that South Korea’s "only allied country" is the United States and that this “alliance is the basis of our foreign and security policy.” China, he said, “is our close neighbor and largest trading partner, and has maintained a strategic partnership relationship with us.”

Chung continued, “Our basic position is clear and not at all ambiguous. Our government's firm position is that based on a solid Korea-U.S. alliance, we will develop relations with China harmoniously.”

Chung also said he is willing to meet with Japanese Foreign Minister Toshimitsu Motegi in” any format” and regardless of location in an attempt to “reach out” to Tokyo and improve bilateral ties.

On trilateral cooperation, Chung said, “The United States, as South Korea and Japan are its very crucial allies, hopes relations between Seoul and Tokyo will get back on a normal track and be restored soon,” but noted that “this is an issue that fundamentally has to be resolved between Korea and Japan.”

He said that Korea been working to find a “realistic” solution to the issue of compensation of wartime forced labor victims, calling on Tokyo to respond to Seoul’s calls for dialogue. Likewise, he said on the wartime sexual slavery issue that “99 percent of the problem will be solved if Japan reflects and sincerely apologizes” in line with the spirit of the so-called comfort women deal in 2015 to restore the honor and dignity of the victims.

Japanese media reported earlier that discussions are underway to arrange a trilateral meeting with Chung, Blinken and Motegi in the United States in late April. Chung has yet to hold a phone call with Motegi since was inaugurated in February, though he has already met face-to-face with his U.S. and Russian counterparts.

Lee Sang-ryol, the Foreign Ministry's director-general for Asian and Pacific affairs, departed for Tokyo Wednesday to discuss the history issues and trade matters, the first such lower-level talks in five months. 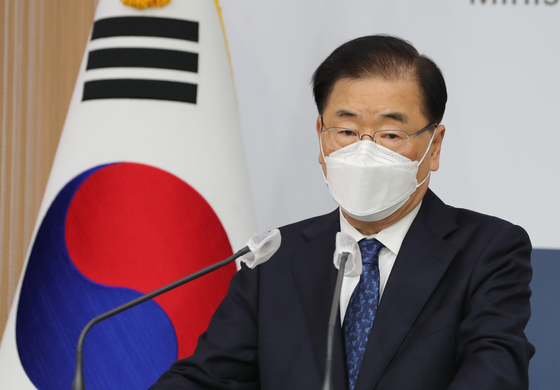 South Korean Foreign Minister Chung Eui-yong speaks in his first press conference with Korean reporters at the government complex in central Seoul Wednesday. He will make a trip to China later this week. [NEWS1]