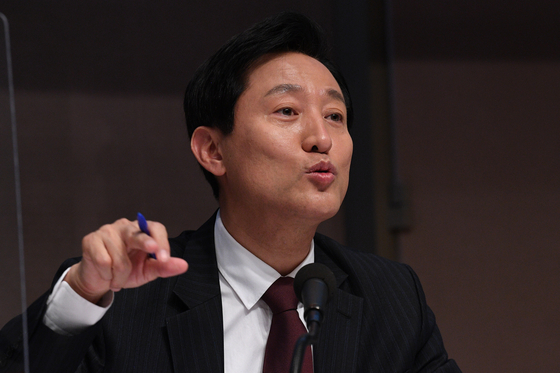 Oh Se-hoon, Seoul mayoral by-election candidate of the main opposition People Power Party, speaks during a discussion session hosted by the Kwanhun Club, an organization of journalists, on Wednesday. [NEWS1]

According to the Realmeter poll conducted over Monday and Tuesday, 55.8 percent of the respondents said they will vote for Oh of the main opposition People Power Party (PPP) in the April 7 Seoul mayoral by-election. Park, former startups minister of the Moon Jae-in administration and candidate of the ruling Democratic Party (DP), scored 32 percent. 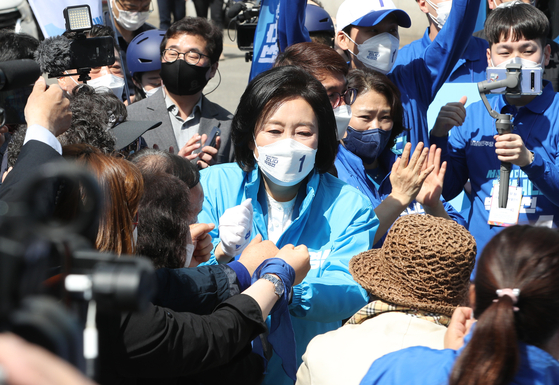 
The poll also asked the voters whom they think will be the winner, and 62.1 percent responded that they think Oh will win, while 28.2 percent said Park will.

Oh’s support rating was higher than that of Park in all age groups. In the previous polls, Park used to score a higher rating than Oh among voters in their 40s, but she was defeated in the same demographic in this week’s survey.

According to the poll, 37.9 percent of the voters — the largest group — said the most important issue in the next week’s mayoral by-election is the stability of the real estate market. Another 26.2 percent said livelihood economy and 10.4 percent said a balanced development of Seoul’s southern and northern areas.

The poll had a 95-percent confidence level, and the margin of error was plus or minus 3 percentage points. More information on the poll is available on the Realmeter and the National Election Survey Deliberation Commission websites.

According to the National Election Commission, publicizing the outcome of a new poll will be banned starting Thursday till the end of the voting hours on April 7. The measure was intended to maintain the integrity of the election from any unfair poll outcomes.