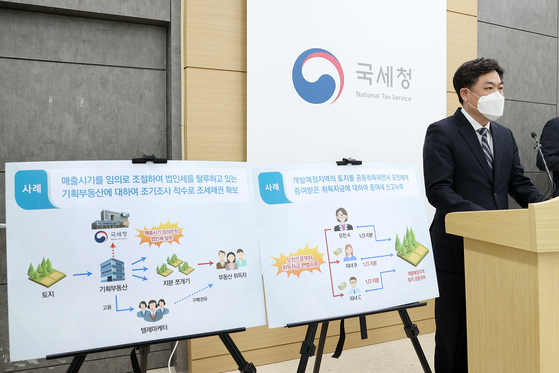 
A person who owns land in Gyosan, Gyeonggi, created an agricultural company and sold the land to the company. In the process, the person got a discount on his capital gains tax by claiming the property would be farmed.

But the land was not farmed, which is considered an intentional dodge by misstating the use of the property.

The person is also suspected of illegally passing on wealth to his children by selling the shares of the agriculture company at below value to his children.

Another person purchased compensation rights from the owners of land in Gwacheon, which is designated for development.

The rights allow the owners to be compensated with another property in the development area instead of cash. This system was adopted in 2007 to allow owners to resettle in the area once the development is complete.

Selling the rights is prohibited.

The landlords will be investigated by the tax agency for dodging capital gain taxes.

The National Tax Service (NTS) on Thursday said it is looking into 165 individuals suspected of dodging taxes in relation to New Town projects.

The tax agency said it is looking into data dating back to 2013.

Also, 30 have been found to have illegally taken funds from companies to purchase the land.

Others under investigation by the tax agency are those that have intentionally misstated the value of the land that they purchased or sold to reduce their tax liability.

"If these illegal acts are confirmed, we will take stern action including referring the case to the prosecutors," said Kim Tae-ho, head of the property taxation bureau.

New Town projects have been the center of controversy after employees of the state-owned developer Land and Housing Corp. were implicated in using insider information to buy land in the development area prior to the government publicly announcing its plans.

The profiteering resulted in a huge backlash and a sharp drop in popularity of President Moon Jae-in and the ruling Democratic Party.

The news of the Blue House policy chief Kim Sang-jo raising rent on an apartment by double digits a couple of days before the ruling party rammed through legislation capping rent increases added to the outrage.