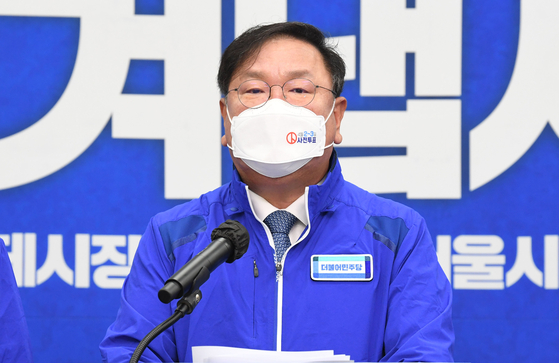 
Shaken by the growing prospect of defeat in next week’s by-elections, leaders of the ruling party issued apologies to voters on behalf of its lawmakers and key members of the administration for exhibiting double standards on property management.

“We lacked sincerity,” Rep. Kim Tae-nyeon, acting chairman of the ruling Democratic Party (DP), said in a press conference on Thursday. “Reform was powerless in the face of skyrocketing housing prices and the myth that real estate investments will always produce profits. We also failed to understand the feelings of the younger generation.”

Kim said he understands the people’s rage and disappointment toward the DP, because they had high expectations. “No matter what the reason is, the DP’s efforts were not enough.”

Kim said the DP will root out the hypocritical attitudes of the party and the administration, adding, “We will strengthen the ethical standards and code of conduct to be more hard on ourselves."

Kim was responding to the snowballing public rage toward revelations that a top Blue House aide and DP lawmakers — in particular one lawmaker who drafted the rent control bills — hiked rents on their properties shortly before the controversial measures went into effect in July last year.

Before announcing the apology, Kim, who has been overseeing the party following Chairman Lee Nak-yon’s resignation to run in next year’s presidential election, and other leaders deeply bowed as a public apology.

Kim’s statement was the second apology from the DP in a week, as the party and the Moon Jae-in administration’s approval ratings plummeted before the crucial mayoral by-elections in the country’s two largest cities of Seoul and Busan. Former Chairman Lee, currently heading the DP’s election campaign, held a press conference and issued the first apology on Wednesday.

“The government and the ruling party failed to grasp the reality of the housing market and to create meticulous policies,” said Lee, who served as prime minister of the Moon government from May 2017 till January 2020 and as the chairman of the DP from August 2020 till last month. “I feel indefinite responsibility and offer my apology.” 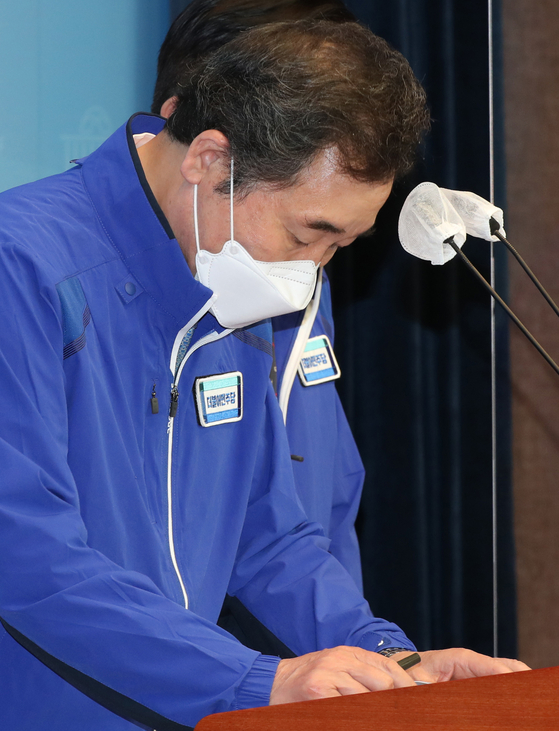 Former chairman of the Democratic Party on Wednesday issues an apology for the government and the ruling party's failure to properly manage the real estate market. [NEWS1]


Lee also acknowledged that the people were deeply hurt by the latest scandals involving DP politicians and government officials. Over the past few weeks, the administration was engulfed by massive real estate speculations by employees of the state-owned Land and Housing Corporation (LH). They were suspected of using inside information to purchase land on sites to be developed.

In the latest polls, DP's Seoul mayoral candidate Park Young-sun’s popularity was far lower than that of her rival Oh Se-hoon of the People Power Party (PPP). Seoul voters have also said the most important issue in the mayoral by-election is the stability of the real estate market.

During Thursday’s press conference, DP’s acting chairman Kim asked for the voters’ forgiveness. “Please give the DP an opportunity to stabilize the real estate market and supply homes,” he said.

While the Blue House and DP leadership are doing their best to control the situation, it remains to be seen if their efforts will change voters’ minds.

Moon fired Kim Sang-jo, the Blue House policy chief in charge of the country’s economic and social policies including the real estate market measures, on Monday following media reports that he made a significant hike in the rent of an apartment he owns just two days before new rent control laws took effect.

On July 30, 2020, the DP used its majority to railroad controversial bills through the National Assembly to protect tenants by restricting landlords’ rights. The administration approved the new laws at an emergency cabinet meeting the next day. The new laws took effect immediately, on July 31.

According to the new laws, tenants were guaranteed renewal of rent contracts for two years after existing two-year leases ended. A 5-percent cap on rent increases and a mandatory reporting of rental rates to the government were also made law. The new rent control laws covered all kinds of rental contracts including jeonse, long-term housing rental deposits.

More reports followed this week that some DP lawmakers, including the one who drafted the bills, also hiked rents before the measures were enforced.

Rep. Park Ju-min of the DP, who drafted the rent control bills, was found to have hiked the rent of his property up before the laws’ passage. Park has long promoted an image of being frugal and an advocate of the country’s weak and poor. 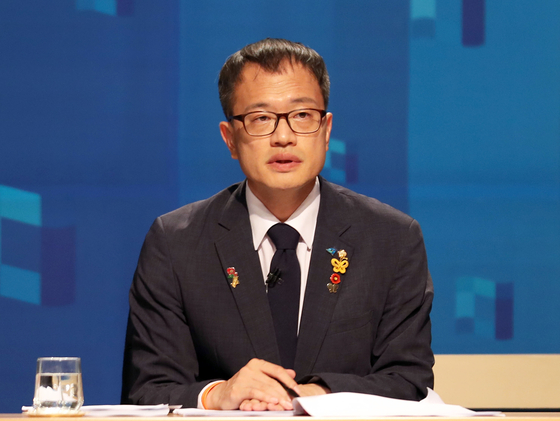 
According to the records of the National Assembly and the Land Ministry, Park signed a contract with a tenant for his property in Sindang-dong, Jung District, on July 3, 2020. The contract said the tenant will pay a deposit of 100 million won ($88,000) and 1.85 million won in monthly rent.

Park had previously rented out the property with 300 million won down for the deposit and 1 million won in monthly rent. When applying the conversation rate of jeonse and monthly rent, Park hiked the rent by 9 percent — larger than the 5-percent ceiling — in the new contract signed on July 3, 2020. Because the rent control measures were passed on July 31, the contract was not illegal, but Park faced criticism for having circumvented the laws that he had drafted.

After local media reported about Park’s rent hike, he blamed his real estate agent in a message posted on his Facebook on Wednesday. That statement further fueled public criticism toward him.

The opposition PPP said Park’s case is a classic example of the DP politicians’ hypocritical behaviors. “Park is no different from Kim Sang-jo, who had long pretended to be transparent, clean and fair,” said Rep. Kim Eun-hye, spokeswoman of the PPP.