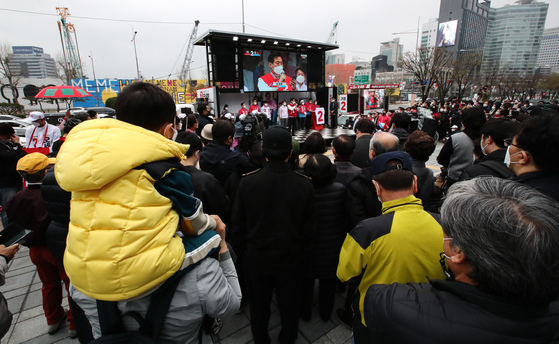 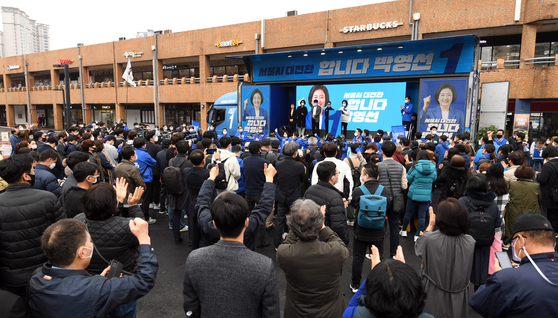 
The government is being criticized for holding double standards as dozens of people are allowed to gather in public for the Seoul mayoral campaigns, contrasting with the clampdown on rallies in the city earlier in the month.

“When nine of us gathered for a rally on March 1, the city mustered some 100 police officers on site to prevent more people from gathering for rallies, over coronavirus concerns,” a head of a civic group who had taken part in the scattered rallies in Seoul in commemoration of the March 1 Independence Movement told the JoongAng Ilbo Monday. “These days, we see some 100 people gather around the candidates in public, and there are no signs of the government stepping in to prevent the crowds from gathering. That seems to me like the city government has double standards.”

Rallies consisting of more than nine people at a time were forbidden throughout Seoul on March 1. The Ministry of Health and Welfare at the time asked people to cancel the rallies as much as possible, citing coronavirus concerns.

But for the campaigns for the upcoming Seoul mayoral by-election on April 7, neither the ministry nor the city government has placed a ban on the number of people allowed to gather for the campaigns.

“The ban on personal gatherings of five or more people still stands throughout the country, but the sporadic gatherings happening in public as part of the campaign trail are not considered personal gatherings,” said Sohn Young-rae, a senior-ranking official of the ministry in a press briefing on Thursday. “The health authorities have recommended that the campaigners try to keep a safe distance from people and that candidates refrain from shaking hands.”

Seoul mayoral candidates Oh Se-hoon and Park Young-sun have been ramping up their public meetings with their supporters in recent days as the election draws closer.

Oh, candidate of the main opposition People Power Party and former Seoul mayor, was seen meeting with his supporters in the crowded streets near Hongik University in Mapo District, western Seoul, on last Saturday.

While a number of campaign managers could be seen trying to ensure a safe distance between Oh and the crowd, there were at least some 40 people gathered around Oh at a time during his visit to the area. 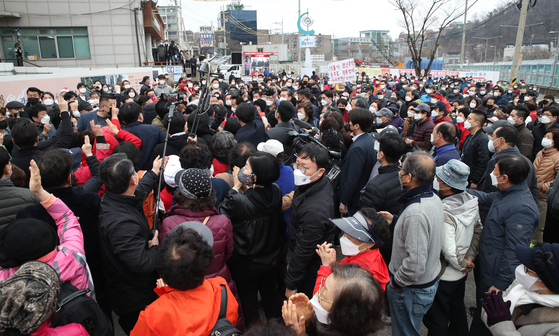 A gathering of Oh's supporters during his campaign in Gwanak District, southern Seoul, on Sunday. [YONHAP]


During Oh’s campaign visit to Coex in southern Seoul on last Sunday, which was joined by minor opposition People Party’s head Ahn Cheol-soo, Ahn was spotted shaking hands with several supporters. There were dozens of people crowding around the two, and it was difficult to tell if the recommended social distance of 2 meters (6.5 feet) was being maintained.


Park, former SMEs minister and the ruling Democratic Party's candidate, also visited pockets of Seoul over the weekend for her campaign. She was traveling with five campaign managers, but was followed by dozens of supporters, reporters and photographers.

Though Park had her mask on at all times, she was asked numerous times to take selfies with her supporters, often standing side by side in close proximity.

“There were some 50 of them, standing with barely any space between them,” said a 28-year-old man surnamed Park who said he had watched these campaign trails by Park and Oh last Sunday in Gangnam District, southern Seoul. “The campaigners came with the trucks, the blasting speakers, and it didn’t look very different from a rally.” 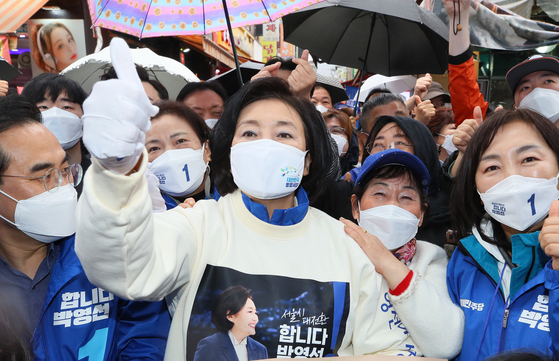 Park poses with her supporters in Dongwon Market in Jungnang District, eastern Seoul, on Saturday. [YONHAP]


Campaign managers of Park and Oh said they were trying their best to maintain a reasonable social distance during the campaigns.

“We are operating based on social distancing guidelines sent to us by the Ministry of Health and Welfare,” one of Park's campaign managers told the JoongAng Ilbo. “Whenever people start to crowd around us, we ask everyone to keep a safe distance between each other.”

“It is a difficult task [to maintain social distancing at all times], because we can’t create physical boundaries when the candidates are meeting with the supporters,” said one of Oh's campaign managers. “But people we’ve met on the streets during the campaign have been quite cooperative in maintaining a good social distance when we ask them to.”