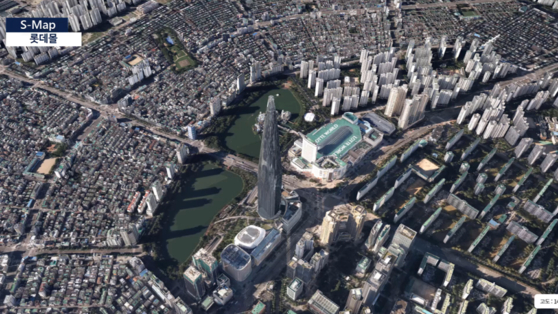 S-Map, a 3-D map of Seoul, was launched on Thursday by the Seoul Metropolitan Government. [SEOUL METROPOLITAN GOVERNMENT]

The Seoul city government launched its a digital 3-D map of the city to be used to predict how new structures could affect and be affected by the metropolis in various ways.


“We have an exact replica of the city in digital form, as a 3-D map complete with real-time information on wind patterns and other environmental factors,” the city government said in its statement on Thursday.

The 3-D map of the city, according to the city government, has information on various levels, including the topography, the underground pipes for electricity, gas and waterworks, the subway routes, the real-time information on road traffic, an outside view of its buildings and even street views of small marketplaces and scenic hanok (traditional Korean house) walkways.

Anyone can access the map at https://smap.seoul.go.kr  although not all the information is available publicly. The map is still being developed, and is expected to run simulations of self-driving cars and predict the possible impact of various levels of earthquakes in the city by 2022.

The simulations are run by the city government for public administration purposes.

The city government said its 3-D map is the first in Korea to allow simulations to take place digitally.

“It’s the first of its kind in that although there have been 3-D maps in Sejong, Busan and Jeonju [North Jeolla], they didn’t cover the whole area of the city,” the city government said in its statement. “This digital twin of the city will allow us to make simulations online to predict the impact of disasters and accidents, such as wildfires, and predict how new buildings and structures built in the city could interfere with the wind patterns of the area and possibly worsen fine dust pollution.”

The map was developed through a collection of 25,000 aerial photographs of the city and drone footage, which were then put together using artificial intelligence programs, according to the city government. It was a public-private project, costing the city 400 million won ($354,000) total. Companies including Naver Labs took part, pitching in an additional 1.4 billion won.

The 3-D map includes other interesting information such as how the city looked during early 1900s in comparison to how the city looks today. The historical map of Seoul will be available through mobile applications in September, according to the city government.