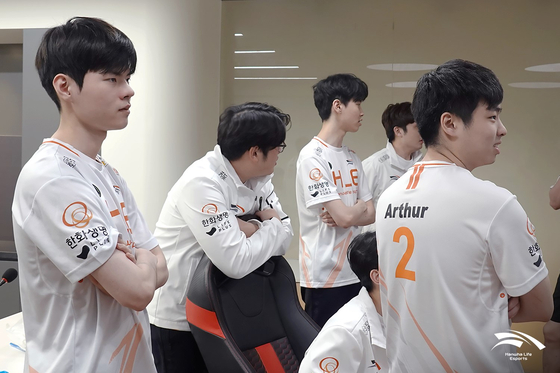 
Hanwha Life Esports scraped together a thoroughly unconvincing 3-2 victory over Nongshim RedForce in the first round of the 2021 League of Legends Champions Korea Spring Split playoffs, on Wednesday evening.

The match was expected to be a blowout, with 87 percent of fan predictions leaning toward Hanwha Life and expert opinions following the same lines. On the most recent episode of the LCK Global official podcast, "The POG State," all four of the league's English commentators called Nongshim's chances dire.

"3-0 for Nongshim," Brendan Valdes had predicted with a cheeky grin as everyone else broke into laughter. Wolf Schroeder agreed, adding that "Of all the predictable matchups, I think this one is the most predictable, and I think it's a really unfortunate matchup for Nongshim."

The general consensus was that Nongshim's usual method of winning games — getting the botlane ahead and snowballing off of that — would be difficult to achieve against the in-form duo of Kim "Deft" Hyeok-gyu and Oh "Vsta" Hyo-seong, while midlane superstar Jung "Chovy" Ji-hun would overwhelm struggling rookie Park "Bay" Jun-byeong and secure Hanwha Life perpetual priority.

Such assessments turned out to be inaccurate.

Nongshim's Seo "deokdam" Dae-gil outperformed Deft in this series, winning lanes even on losing matchups. Bay also fared somewhat better in lane than was expected, save for one atrocious display in Game 3. The two teams looked to be rather evenly matched and Hanwha Life only managed to close the series thanks to substitute jungler Park "Arthur" Mir, who came off the bench for Game 5 and delivered a heroic 4/0/11 performance on Hecarim to win Player of the Game.

"I'm really grateful that [Arthur] played so well today, coming off the bench in such a high-pressure situation," Deft told the Korea JoongAng Daily after the match. "I didn't expect this match to be easy, since all of the teams in the league are skilled — but I'm not satisfied with my own play today, and our invade/counter-invade setups were off. We'll need to learn much and improve from today's games."

One constant talking point among fans and pundits this split was that Hanwha Life seem to suffer as a team when Chovy is placed on relatively stationary mage champions that need some time to ramp up, such as Orianna and Viktor. Deft dismissed those concerns, saying that he does not believe any of their games were lost due to Chovy having played a mage instead of something with an earlier power spike.

"Ji-hoon's great on mages, and our picks are always based on scrim data and statistics. Other teams ban mages against us too, right? I never felt [Chovy's picks] were the issue."

Deft, who has been playing professionally for more than eight years and is slowly approaching the end of his storied career, has recently stated in various interviews that he decided to tone down his fixation on winning trophies and instead focus more on staying healthy and happy.

Did he feel less pressured today thanks to this new mindset?

"I got stressed just the same," he said, then chuckled. "I do put in the effort to think [more positively], but I don't think it has an actual effect yet. I don't get any less stressed."

While he looked and sounded very tired as the interview wrapped up, Deft said he had no plans to call it a night.

"I don't think I'd be able to fall asleep right now, even if I were to go to bed," he said. "So I'll probably go rest a bit and then play some more solo queue before turning in."