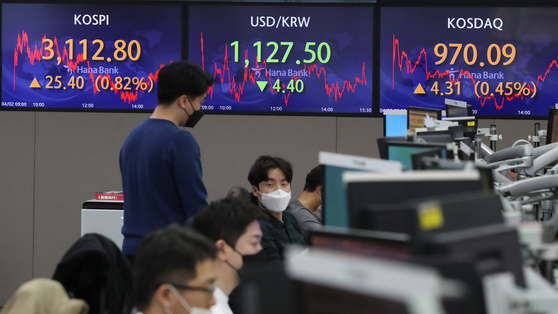 Seoul's benchmark Kospi closed at 3,112.8 on Friday, up 0.82 percent compared to the previous trading day. It is the first time since February 19 the index closed at over 3,100-mark. [YONHAP]

Seoul’s benchmark Kospi closed above the 3,100-mark for the first time since February on Friday, influenced by the overnight rally in U.S. stocks amid hopes of massive infrastructure investment in the United States.

Trading volume was moderate at about 781 million shares worth some 13.2 trillion won, with losers outnumbering gainers 450 to 371.

Stocks were boosted by market optimism over a $2.25 trillion infrastructure proposal by the Biden administration, which local investors hailed as a source of momentum to help the global economy recover from the pandemic.

Forecasts of an earnings hike also lifted the stock prices ahead of the upcoming earnings report season.

The local currency closed at 1,127.5 won against the dollar, down 4.4 won from the previous session's close.

Bond prices, which move inversely to yields, closed mixed. The yield on three-year bonds added 1.3 basis points to 1.151 percent, while the yield on the benchmark five-year government bond lost 0.5 basis point to 1.575 percent.

Stocks drop as investors flee to safety on Russia news