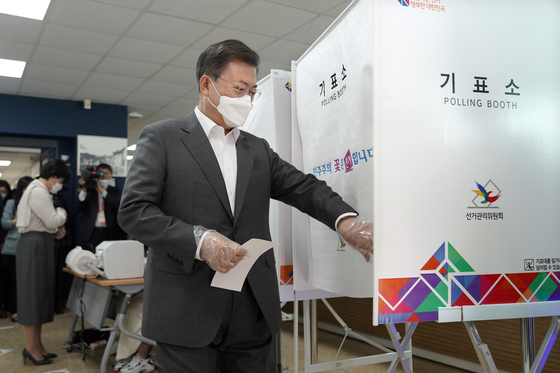 President Moon Jae-in enters a polling booth at the Samcheong-dong Community Center to cast his ballot for the Seoul mayoral by-election. The two-day early-voting period for the Wednesday's by-election started on Friday. [YONHAP]


Early voting for Wednesday’s by-elections started on Friday, and President Moon Jae-in cast a ballot in the morning near the Blue House for the election of a new Seoul mayor.

According to the Blue House, Moon and his wife, Kim Jung-sook, cast ballots at the Samcheong-dong Community Center in the morning. Friday marks the first day of the two-day early-voting period for the Wednesday’s by-elections.

Early voting is allowed from 6 a.m. untll 6 p.m. on Friday and Saturday at the at designated locations. On Wednesday, voters will cast ballots from 6 a.m. until 8 p.m. at polling stations. 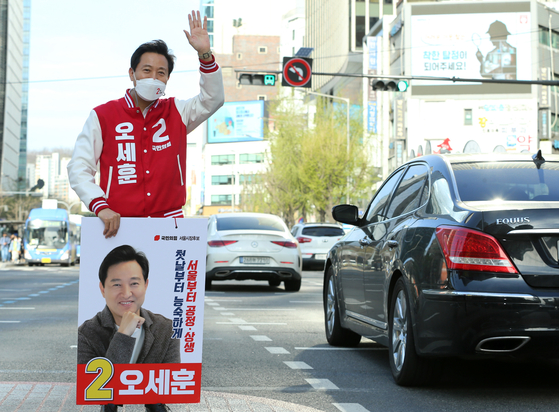 Moon wore a facemask and disposable plastic gloves to cast the ballot.

It was Moon’s third time casting a ballot during an early voting period. He did so for the local elections in June 2018 and general elections in April last year.

When Moon voted early in 2018, the Blue House promoted it in advance. At the time, then presidential spokesman Kim Eui-kyeom said Moon did so to increase voter turnout.

This year, the Blue House kept the event quiet. Moon’s schedule to attend the early voting was announced at 8:31 a.m., just 27 minutes prior to his arrival at the site. 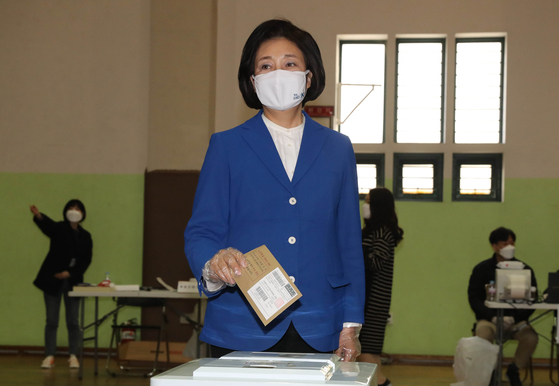 On Friday, Moon’s approval rating hit a new low. According to Gallup Korea, his approval rating is 32 percent, a 2-percentage-point drop from the previous week. His disapproval rating was 58 percent. The survey has a 95-percent confidence level and plus or minus 3.1 percentage point margin of error.

In the Seoul mayoral race, Park Young-sun of the ruling Democratic Party (DP) and Oh Se-hoon of the main opposition People Power Party (PPP) are the main competitors.

According to a poll conducted by the JoongAng Ilbo on Tuesday and Wednesday, Oh is supported by 50.4 percent of the voters in Seoul, while Park has the backing of 35.7 percent. In the Busan mayoral race, PPP’s Park Heong-joon is leading the survey. According to the JoongAng Ilbo, Park has the support of 51.9 percent of those polled and his DP rival Kim Young-choon has 31 percent.

The poll has a margin of error of plus or minus 3.1 percentage points and confidence level was 95 percent.

More details about the JoongAng Ilbo and Gallup Korea polls are available on the internet site of the National Election Survey Deliberation Commission.

Wednesday’s by-elections are considered a crucial political test for the DP and PPP ahead of next year’s presidential election. The vacancies were created due to sexual harassment scandals of the mayors, both DP politicians.

Park started her day on Friday by casting a ballot at an early-voting station. Oh is scheduled to cast his ballot on Wednesday.