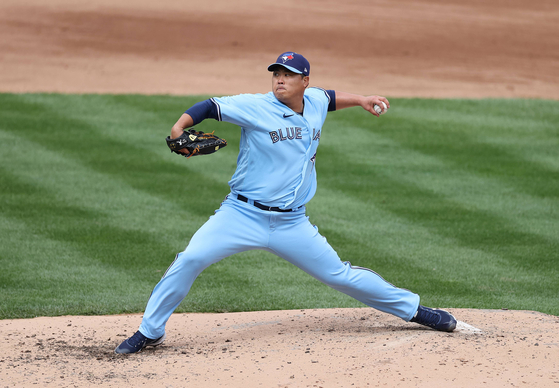 Ryu Hyun-jin of the Toronto Blue Jays pitches against the New York Yankees during Opening Day at Yankee Stadium on Thursday. [GETTY IMAGES/YONHAP]


The Toronto Blue Jays started the 2021 MLB season with a 3-2 win over the New York Yankees, although ace Ryu Hyun-jin missed out on a personal W after giving up a home run in the second inning.

Ryu earned two runs on four hits in five and one third innings against the Yankees at Yankee Stadium in New York on Thursday, with both runs earned on a single homer at the bottom of the second.

The Korean ace pitched well for the rest of his time on the mound, picking up two strikeouts in the first inning to set the tone and retiring nine batters in a row after the two-run home run.

Ryu left the mound at the top of the sixth inning with a runner at first base and the score tied at 2-2. The Blue Jays bullpen stepped in to finish the job, shutting down the Yankees at every turn all the way into an extra tenth inning, when Toronto finally broke the silence to end the game 3-2.

Ryu threw 92 pitches, 53 of them for strikes. He walks away from the opening game with a no decision and a 3.38 ERA.