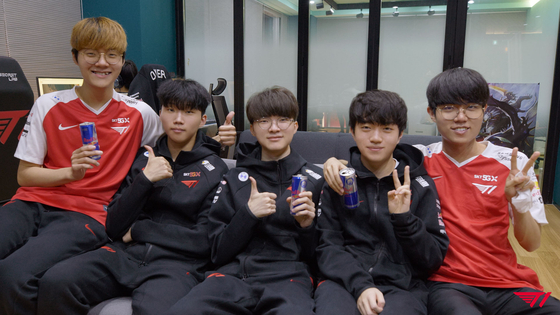 The T1 League of Legends team pose for the camera at their training facility. [T1]


T1 continued their strong run of form into the postseason by taking down DRX 3-1 in the first round of the 2021 League of Legends Champions Korea Spring Split playoffs, on Thursday evening.

Most fans and analysts were expecting this result — before the match, all 11 LCK on-air talent predicted T1 to advance. T1 had been looking unstoppable as of late, bouncing back dramatically from their woeful season start to lead the league in most early-game performance indicators. DRX, in contrast, had been trending downward in recent weeks.

Pre-match assessments focused on the power mismatch in the bottom lane, as well as the dizzying gap in experience between T1's veterans and DRX's rookies. Both issues were later highlighted on the rift.

The first two games were relatively close and featured silly mistakes from both sides, but as the series went on, Park "Teddy" Jin-sung and Ryu "Keria" Min-seok started running circles around Jeong "BAO" Hyeon-woo and Son "Becca" Min-woo, while Song "Solka" Soo-hyung struggled to keep up with Lee "Faker" Sang-hyeok's tempo. DRX eventually crumbled, and T1 closed the series in dominant fashion.

"I'm [relatively] happy with the 3-1 today," said T1's Moon "Cuzz" Woo-chan, speaking to the Korea JoongAng Daily after the match. "DRX is a good team with clutch potential, so I figured we might drop a game, especially if they had prepared an [ace up their sleeve]."

Cuzz, who delivered a solid performance in all 4 games and minimized DRX ace Hong "Pyosik" Chang-hyeon's influence on the series, was happy about how the match played out. "I'd give myself an 8 out of 10 today — I did make a positive contribution overall, but I also made some plays I'm not satisfied with. Going forward, I'll patch up those holes and sharpen my focus."

Asked to single out a teammate for praise — aside from Teddy, who he commended on the broadcast post-match interview — Cuzz wished to highlight his toplaner Kim "Canna" Chang-dong. "I want to applaud Chang-dong today," he said. "He [didn't have the greatest of days] the last time we faced DRX, but he really stood his own this time and played very well."

This season, Cuzz had gone through more than a month without seeing play, with head coach Yang "Daeny" Dae-in benching the three-time LCK champion in favor of granting playing time to rookie talents Choi "Ellim" El-lim and Moon "Oner" Hyeon-joon.

Cuzz affirmed that "the team's victory is [always] the ultimate goal", but also admitted it had been tough at times to watch from the sidelines. During his time away from the action, he worked on his individual game while drawing strength from his friends' encouraging text messages.

Asked whether the pressure of possibly being subbed again could be felt during matches, Cuzz answered that he chooses to block such thoughts out completely. "[It] might subconsciously form, I guess, but I feel it's not [beneficial] for me to think about such things, so I try not to think about it."

None of T1's players who started on Thursday will have much reason to worry about their spot during the remaining playoff run, of course, considering how well this particular lineup has been performing.

"One thing I want to really make clear is that all of our team's players are on good terms," Cuzz said. "And all of us play better when fans cheer us on, so I'd be grateful if positive words were sent our way."