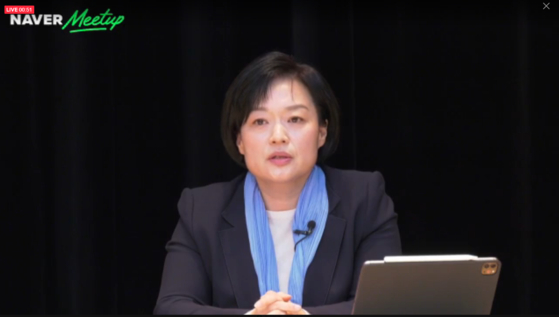 
The chief of Naver, Korea’s largest internet portal, detailed the company’s e-commerce strategy in a letter to shareholders Friday.

CEO Han Seong-sook said the company is looking to partner with thousands of shops and supermarkets for faster delivery of groceries and goods to maintain its current status as top e-commerce player, with total transactions hitting 28 trillion won ($25 billion) last year.

“We are reviewing plans to leverage Emart and Shinsegae’s 7,300 offline stores to introduce same-day or next-day delivery service to Naver Shopping, free delivery to Naver Plus members, and fresh food delivery service for Smart Store,” Han said in the letter. Naver Plus is a paid membership service that had 2.5 million users as of the end of last year.

The plan came after Naver and Shinsegae agreed to swap stock last month in a strategic alliance.

Industry insiders said the strategy should boost a range of products that the company was relatively weak in, such as groceries and luxury goods.

“With the massive scale of the retail market and online retail just in its infant stages, we are confident that we will gain market share, especially in household items, online groceries, luxury categories, subscription, and rental services,” Han wrote.

This is the first time that the company made public such a letter to shareholders.

Another initiative is to make items from smaller merchants accessible to a consumer base outside Korea through a new shopping feature integrated into Yahoo and Line. SoftBank and Naver jointly control the two companies operating in Japan through a holdings unit called Z Holdings.
“Initially, Smart Store will become our flagship business in Japan launched in the first half of this year,” Han wrote, adding that Naver’s shopping platform will be integrated with Line’s Gift and Yahoo.