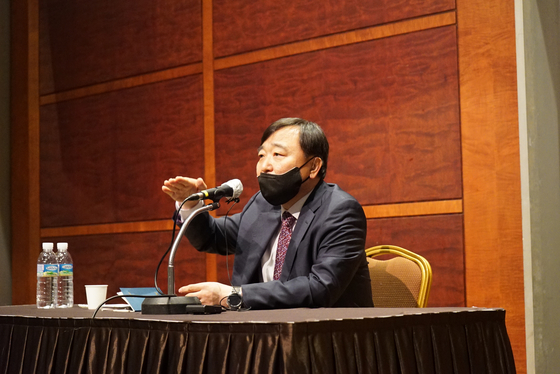 
Korea Aerospace Industries (KAI) wants 30 percent of its annual revenues to come from new businesses like personal air vehicles, satellites and software for aerospace companies by the end of this decade.

The goal is an ambitious one for Korea's leading defense and aerospace company, which had revenues of 2.8 trillion won last year. Behind the plan is an expectation of a paradigm shift in which aerospace technology is led by private companies.

"Space projects were led by governments in the past. [SpaceX founder] Elon Musk changed this by drastically cutting costs and showed the private sector could boost value in the space industry," said KAI President and CEO Ahn Hyun-ho at a press conference Friday in Gangnam, southern Seoul, where he shared the company's mid-term plans.

"There will be immense benefits we can earn from space but we shouldn't be too excited as this will take years to realize," Ahn said. "The company will calmly prepare and continue investments in the sector."

KAI is part of a government project to share technology for developing and producing mid-sized satellites from Korea Aerospace Research Institute (KARI), a state-owned research body. KAI was KARI's main partner in the design and production of the first of  five satellites planned, which was launched last month.

Ahn said the business potential in satellites lies not in hardware but in software services like analyzing video and photos sent from space.

"We're discussing M&As with firms that could provide technology in analyzing photos taken from satellites," he said. "I think we'll be able to announce partners by May or July. If we can enter that field fast, it will start to boost revenue in the next two to three years."

"UAM is essentially an aircraft -- and that's what KAI does best in this country," he said. "The core technology for UAMs is vertical take-off and landing — it's essentially the same as what's used in helicopters."

The real question for KAI, Ahn added, is not whether it can make UAMs but with whom it should team up.

"There will be various UAM [companies] in the market at some point — the real question will be who sets the standard for building the cheapest product with the highest quality," he said.

"KAI has the technology but we don't have the brand power to set an industry standard. So our strategy is to partner with other companies as a consortium. We're searching for partners among universities and companies at the moment."

To reach the 2030 revenue goal of 10 trillion won, KAI has pledged investment of 2.2 trillion won between 2021 and 2025, of which 1 trillion won will be dedicated to research & development (R&D). The rest will go to upgrading facilities to "smart" factories and acquisitions of firms with promising technology.

In the immediate future, however, KAI is set for a difficult 2021, as a range of industries try to recover from the impact of the Covid-19 pandemic.

Airbus and Boeing, in particular, are major exports clients, but orders from them are unlikely to revive before travel gets back to normal. Governments in many countries cut defense budgets as well, another damper on KAI's overseas sales.

Its export revenues last year were cut by a half compared to 2019.

"This year will be our bottom for parts supply and military aircraft exports--our goal this year is to help our suppliers stay afloat" Ahn said.

"Our outlook is that orders from Airbus will start increasing in the year's second half but for Boeing, it will take a little longer, around the first half of 2023, we presume."

KAI's outlook for domestic revenues is not bad as government-funded projects like the KF-X fighter jet and its Light Armed Helicopter have shown progress. The prototype for the KF-X, Korea's first domestically developed fighter jet, is slated to be shown to the public for the first time this week.