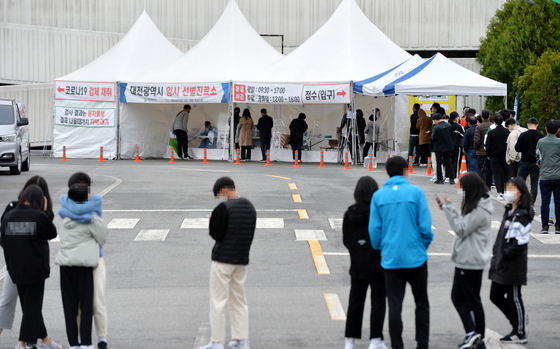 People line up to get tested for Covid-19 at the Daejeon Hanbat Sports Complex on Sunday. [KIM SUNG-TAE]


Korea's daily new Covid-19 cases exceeded 500 for the fifth consecutive day, raising worries of a fourth wave as cluster infections continue to grow outside the capital.

Korea reported 543 new daily cases, including 514 local infections, raising total patients to 105,279 as of Saturday midnight, according to the Korea Disease Control and Prevention Agency (KDCA).

This marked the first time since January that the number of newly confirmed cases stayed above 500 for five straight days, despite fewer tests being performed on the weekend.

Of local transmissions, both Seoul and Gyeonggi reported 146 cases each, and Incheon reported 19 cases.

However, cluster infections continued outside greater Seoul, accounting for around 40 percent of the latest cases.

Cases involving a hostess bar in Cheongju in North Chungcheong rose to 23, and cases related to a bar in Jung District in Daejeon accumulated to 14.

Fourty-one cases were newly added related to a cluster tied to a church with branches in Daejeon, Jeonju, and Hoengseong, raising the total number to 71.

As cluster infections went beyond greater Seoul and spread across the country, the Health Minister made a public statement on Sunday afternoon asking for cooperation.

"Looking back on the past year's experience, the current situation has many similarities to just before the pandemic began in earnest," Health Minister Kwon Deok-cheol said. "We can say that we are currently at a crossroads where a fourth potential wave may begin, with more than 1,000 cases per day."

In Korea, a third wave of infections has been present since mid-November, and has stayed steady with the number of daily infections hovering in the 300s and 400s for the past two months.

Another major concern is the supply of vaccine doses.

According to the KDCA, the amount of AstraZeneca and Pfizer vaccines confirmed to be delivered in the second quarter — from April to June — is 15,397,000 doses, which will inoculate 7,698,500 people, as both vaccines require two doses.

This is far short of the number of people — 11,503,400 people — that were supposed to be vaccinated in the second quarter.

In a press release Friday, the KDCA said it plans to change the interval between doses of the AstraZeneca vaccine to eight to 12 weeks, compared to the previous four to 12 weeks as recommended by the Drug Safety Ministry. That could help with a supply crunch in the next few weeks.

Health authorities also plan to make more use of low dead space (LDS) syringes, which are designed to maximize vaccine doses from each vial and boost the number of recipients in the second quarter, including high school seniors and teachers. 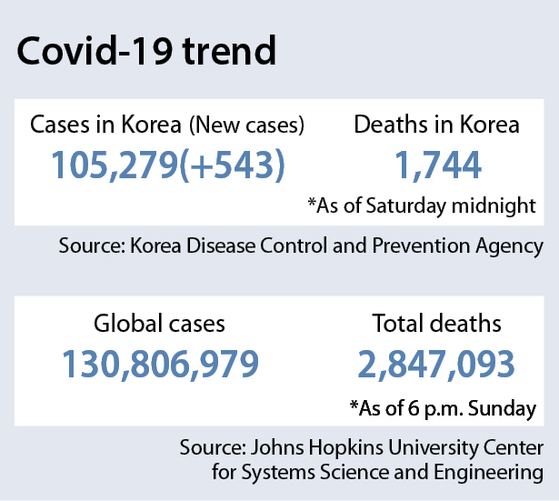 So far, a total of 962,083 people have received their first vaccine shots in Korea, or around 1.86 percent of the country's population.

Meanwhile, starting Monday, fines will be imposed on all multi-use facilities if they violate the "basic preventative rules". Basic rules that apply to both owners and customers include wearing masks, posting social distancing rules, and regular disinfection and ventilation. The fine will be a maximum 3 million won for owners and 100,000 won for customers.