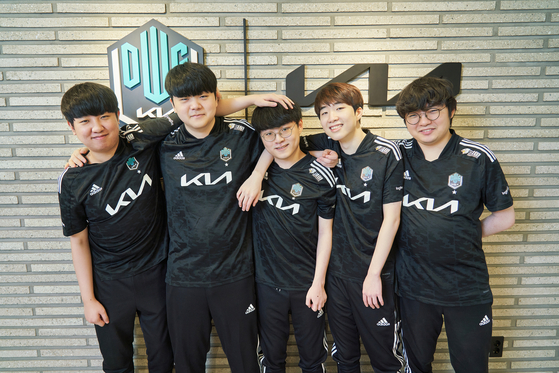 The DWG KIA League of Legends team pose for the camera in the media room of their new headquarters. [DWG KIA]

Despite having played their last match only three days ago, Hanwha Life came in with some fresh strategies for the series. In Game 1, Park "Morgan" Gi-tae used Lulu for the first time this season and Jung "Chovy" Ji-hun opted for an unorthodox Ryze pick. When that curveball went awry, in-form jungler Park "Arthur" Mir was then immediately subbed in to shake things up.

Unconventional drafting and proactive substitution could only do so much against the best team in the world, unfortunately. HLE proved their mettle by grabbing an early lead in all three games — large ones, in fact, in Games 2 and 3 — but DWG KIA were able to bounce back no matter the deficit, thanks to their refined macro and unparalleled understanding of compositional power spikes.

Individual form was a deciding factor as well. While Arthur surprisingly held his own against regular-season MVP Kim "Canyon" Gun-bu, HLE's usual one-two punch of Chovy and Kim "Deft" Hyeok-gyu showed uncharacteristically poor displays, and neither Morgan nor Oh "Vsta" Hyo-seong could step up to the occasion.

DWG KIA, on the other hand, looked as sharp as usual. Some lapses of judgment were made, but none lasted long enough to cost a game — even in Game 3, where the team was down 3k gold at 15 minutes, DWG KIA were able to force a comeback through standout performances from Heo "ShowMaker" Su's trademark Zoe and Jo "BeryL" Gun-hee's LEC-inspired Cho'Gath.

"I'm happy to have secured a spot in the finals," DWG KIA's Kim "Khan" Dong-ha told the Korea JoongAng Daily after the match. "One last step remains, of course — I'll do my best to be the one smiling at the end."

In May, Spring Split champions from around the globe will gather in Reykjavik, Iceland for the 2021 Mid-Season Invitational. DWG KIA players have been vocal about their desire to take part, with ShowMaker in particular renaming one of his solo queue accounts "Laugardalshöll" — the indoor sporting arena in which the tournament will take place.

Unlike his younger teammates, Khan is a two-time MSI veteran, having made the finals in 2018 on Kingzone DragonX, then the semifinals in 2019 on SK Telecom T1. So while curiosity won't be a part of his motivation to qualify, he emphasized that he "absolutely" wants to participate a third time.

If the team is to make it to Iceland, they will have to take down either T1 or Gen.G in the finals. Khan confirmed that he remains warier of Gen.G, who took a match off DWG KIA in the regular season.

Regardless of which team comes up from the other side of the bracket, a lot will rest on star player Canyon's shoulders. While the 2020 Worlds Finals MVP had a quieter game than usual today, Khan had nothing but praise for his jungler.

"It's really rare [for a player] to be both intelligent and mechanically talented," said Khan. "But that's Canyon — he can do anything well. We can give him a carry role and funnel him resources, or ask him to pick something supportive and help out the lanes. I'm always happy to take on a sacrificial role [for him]. When I look at who's taking my resources, I feel generous because [I know he'll deliver]."

For most of his career, Khan used to be the first or second option for his team; his signature picks consisted of high-risk high-return side lane champions that demand a certain amount of team support. On DWG KIA, however, he has mainly been playing low-resource tanks.

Does he ever miss running the show all the time?

"Resources on the rift are always limited, and how best to allocate those resources is dependent on not only the meta but also on team makeup," Khan said. "On a team like ours, where everyone is more than capable of great performances, my optimal role might change from game to game. The important thing is to always try my best to fulfill the responsibilities given to me by the team."