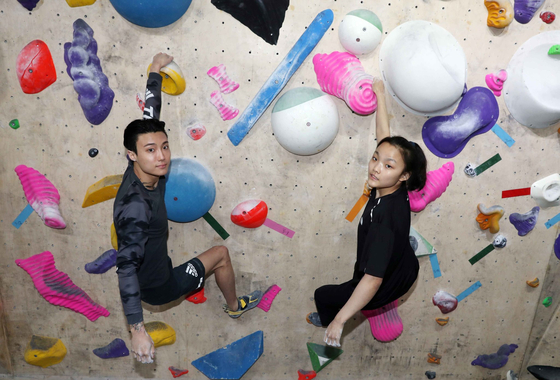 
Seo Chae-hyun and Chon Jong-won are set to become Korea's first ever climbing Olympians, as sport climbing officially becomes a medal sport for the first time at the Tokyo Games.

The two climbers very nearly didn't make it to Tokyo, only earning an Olympic berth at the last minute, on March 9.

The International Federation of Sport climbing (IFSC) gave out 28 of the 40 Olympic spots — 20 each for men and women — based on the 2019 World Championship ranking. The remaining spots were to be given to the highest-ranking athletes that didn't already have a berth from each continental championship, which would have been the Asian Championships for Korean athletes.

However, when the 2020 IFSC Asian Championships in Xiamen, China, were canceled due to the coronavirus pandemic, the IFSC had to come up with a new qualification system for the postponed Tokyo Games. As the next-highest ranking Asian climbers from the 2019 World Championship, Seo and Chon got their shot at Olympic glory.

In speed, athletes compete to climb an identical 15-meter (50-foot) wall set at an angle of 95 degrees faster than their opponents.

In bouldering, athletes climb different routes without ropes within 4 minutes. The routes vary in difficulty and athletes do not get to see them in advance.

In lead, athletes attempt to climb as high as they can on a 15-meter wall within 6 minutes.

Controversially, the International Olympic Committee permitted sport climbing at the Olympics, but only as a single discipline — athletes have to compete in all three disciplines and the final rankings are calculated both on all three scores. The athlete with the lowest score wins, with just one set of medals available for each gender.

On March 26, Chon and Seo were hard at work preparing for that medal pursuit at an indoor climbing wall in Gangnam, southern Seoul.

Twenty-five-year-old Chon is more confident in bouldering than lead, while 18-year-old Seo is the other way around.

“Bouldering is more short distance whereas lead is like a marathon," Chon says. “I find lead difficult but Seo surprises me with her talent. With slight improvements to her forearm muscle work and jumping ability, I’m sure she’ll be as great in bouldering.”

The two climbers haven't had an easy path to the Olympics.

Chon said he used to eat only a small bowl of rice a day to keep his weight under 60 kilograms (132 pounds). He does pull-ups wearing a 72.5-kilogram belt because maintaining his muscle strength is equally important.

The physical toll on their bodies extends outside the sport — both climbers struggle to pass a fingerprint identification because their fingerprints have worn off from training more than eight hours a day.

Seo said she was “bewildered” when she heard she was going to the Olympics. Chon, on the other hand, said he was lucky, but could have made it on his own.

“These two have never given up even when the chances of going to the Olympics were low," said Korean national climbing team coach Lee Chang-hyun. "Now that we are, our goal is to win.”


Seo and Chon both expressed a strong desire to win. When asked “If you had super powers like Superman, what would you do?”, both answered simultaneously “Win an Olympic medal.”