LED makers hope for a big win with EVs

LED makers hope for a big win with EVs 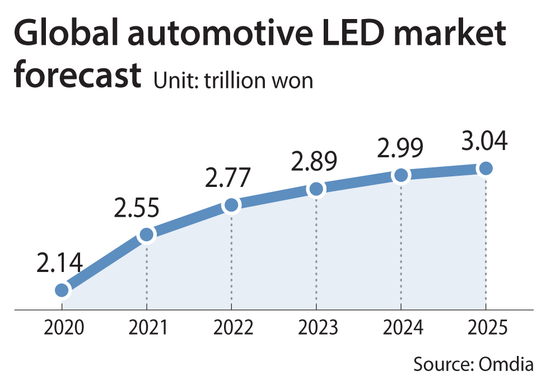 Korean companies are hoping to gain significant share in the light emitting diode (LED) business after years of struggling to make a dent in a market that is extremely competitive and relatively slow growing.

The opportunity is in electric vehicles (EVs). Unlike internal combustion engine cars, energy efficiency is very important to EVs, and LEDs are very energy efficient.

The global LED market is expected to grow 3.2 percent this year, according to market researcher Omdia on Monday. It estimates that the LED market for vehicles will grow 19 percent and reach $2.26 billion this year.

The LED business in lighting, mobile and laptops will decline slightly.

At present, Osram Opto Semiconductor, a German company, ranks No.1 in automotive LED manufacturing, with 36 percent, and Japan's Nichia Corp. is No. 2, with 23.6 percent, according to market tracker TrendForce. Seoul Semiconductor has a market share of 5.1 percent, making it No. 5 globally, while Samsung Electronics has 2.8 percent, putting it in 7th place.

About a decade ago, the LED industry was a promising business with great prospects. Samsung Electronics in 2010 announced that LEDs were one of its five new growth drivers, along with solar cells, rechargeable cells for hybrid electric vehicles, biopharmaceuticals and medical equipment.

But shortly after, a government move threatened to preemptively kill Korea's LED push. In 2011, the Korean government designated LEDs as suitable for small and medium-sized enterprises and actively discouraged large companies from getting involved.

"LED technology has already been applied to almost all products in IT, including laptops, TVs and smartphone," said Hong Myeong-ki, CEO of Seoul Semiconductor. "But the automotive sector can be seen as a blue ocean, or an unexplored potential market."

"Domestic companies will most likely to be able to boost their competitiveness in the global market by adopting new technology and taking preemptive measures," Hong added.

The mini LED market is also growing at a rapid speed. The product can potentially produce a better picture than Liquid Crystal Displays (LCDs).

"As many of China's LED manufacturers are struggling due to the coronavirus outbreak, it's a great opportunity for local companies to increase their market share in the global market," said Kim Rok-ho, a Hana Financial Investment analyst.