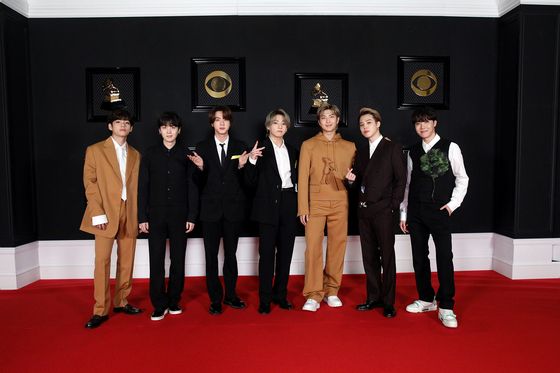 
HYBE's latest effort to diversify away from its over-dependence on BTS, from which it derives about 85 percent of revenue, received a mix review from the market.

After announcing that it is spending $1 billion to buy Ithaca Holdings, the company behind Ariana Grande and Justin Bieber, the stock popped about 8 percent, only to end the day up 2.06 percent to 248,000 won ($225).

Analysts remain more positive on the deal and argue that the acquisition will make sense over the longer term.

The acquisition of Ithaca Holdings will give it the negotiation power to acquire bigger overseas talent management labels, according Ahn Jin-ah, an analyst at eBest Investment & Securities. "The chance of the Korean company leading the global music market cannot be ruled out."

Park Ha-kyung, an analyst at Korea Investment & Securities, has a 340,000 won target for HYBE, saying the recent acquisition will lower HYBE's reliance on BTS, whose members face mandatory military service.

In the deal, recently-listed and recently-re-branded HYBE is acquiring 100 percent of Ithaca Holdings for 1.18 trillion won through its subsidiary HYBE America. That includes SB Projects, a talent management company home to Grande, Bieber and Demi Lovato, as well as Korean artists like CL and Psy, and Big Machine Label Group, an American independent record label.

HYBE has three businesses: its music label, performances and games, and the Weverse fan community platform.

In 2017, the company generated 97 percent of its revenue from BTS, which has been lowered to 85 percent after the acquisition of Pledis Entertainment, said Park.

"Revenue generated from global pop singers will continue to lower the reliance on BTS. And the diversity of music genres, including hip hop, Latin and country music, from what only used to be 100 percent K-pop music gives a new growth engine for the company," Park said.

HYBE went public as Big Hit Entertainment in October, and is trading well below its high of 351,000.

HYBE is more than just a talent management firm, but a platform provider that will create a barometer for a musician's success, said Park Jeong-yeop, an analyst at Mirae Asset Daewoo, while estimating HYBE's stock price reaching 340,000 won.

"The company has secured top-tier artists, and they are set to enter Weverse platform," said Park. "In the future, entering Weverse will be seen as a barometer for a musician's success," Park added.

Since HYBE went public, it acquired V Live to integrate the video streaming service with Weverse, became the second largest shareholder of YG Plus and established a joint venture with Universal Music Group before acquiring Ithaca Holdings.