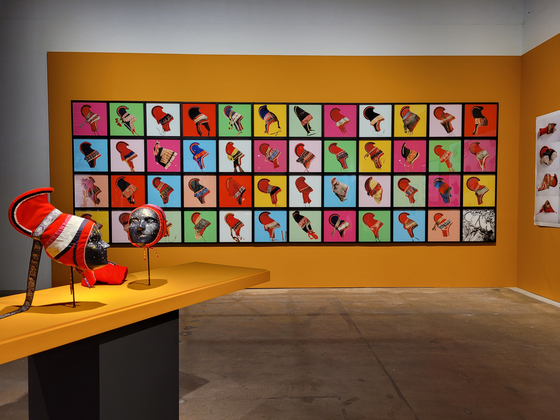 “Foremother’s Hat of Pride” by Eeva-Kristiina Harlin and Outi Pieski is part of the main exhibition “Minds Rising, Spirit Turning” of the 13th Gwangju Biennale, which runs through May 9.[MOON SO-YOUNG] 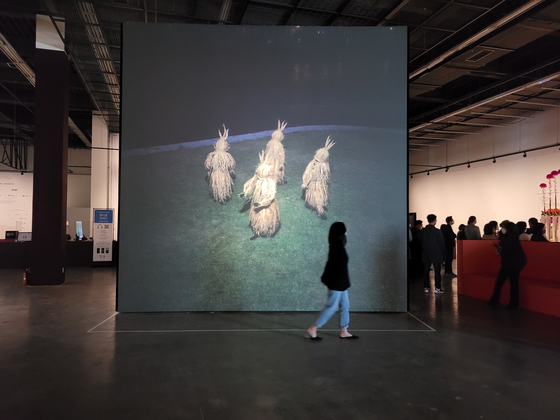 
GWANGJU – The 13th edition of the Gwangju Biennale, postponed two times due to the pandemic, kicked off last Thursday. Directed by Defne Ayas, who is the curator at large for the V-A-C Foundation in Moscow and Venice, and Natasha Ginwala, who is an associate curator at Gropius Bau in Berlin, the main exhibition has the theme “Minds Rising, Spirits Turning.” It is about the “extended mind,” in relation to alternative intelligence, that is, alternatives of science and rationalism-oriented intelligence defined by Western modernity.


According to the introduction on its web site, the Gwangju Biennale avows “the dissemination of the ‘communal mind’ - continuously emergent and rooted in healing technologies, indigenous life-worlds, matriarchal systems, animism, and anti-systemic kinship.” The main exhibition will “delve into a broad set of cosmologies, activating planetary life-systems, queer technologies and modes of communal survival [and] how they contend with the future horizon of cognitive capitalism and planetary imperialisms.”

The result, an exhibition of 450 works by 69 teams of artists from more than 40 countries, is visually rich and colorful, and includes many artworks inspired by indigenous religions, rites, arts and crafts from various parts of the world, as well as artifacts on loan from the Museum of Shamanism in northern Seoul. In addition, the pieces are installed smartly and effectively in the four venues — the Gwangju Biennale Exhibition Hall, Gwangju National Museum, Gwangju Theater and Horanggasy Artpolygon, looking more neat and compact than the former editions of the biennale.

For example, let’s see the colorful abstract sculptures that Sonia Gomes created by combining secondhand textiles with used furniture and driftwood. The sculptures, picked as one of the main exhibition’s 18 highlights by the two artistic directors, celebrate Afro-Brazilian tradition and women’s crafts, which were once belittled by the West and male-oriented culture, while suggesting the artist’s body suffering from racial and gender discrimination. The sculptures are installed against green-colored walls. Over the green walls is a yellow-colored wall on which hang a pair of effigies of Korean shamanism gods made of paper and wood. They are artifacts from the Museum of Shamanism. They together make a strangely beautiful image that please the viewers’ eyes and stimulate curiosity.

However, the sculptures by Gomes and the effigies of Korean shamanism gods are not closely related except for that both are from indigenous cultures and have tints of animism. All the exhibits are just loosely related with one another in this way. They seem to be a not-very-new collection of artworks about post-colonialism, feminism, LGBTQ rights, indigenous culture and so on, in other words, all kinds of works against Western and male–oriented art, which have already been the main discourses of contemporary art for decades. 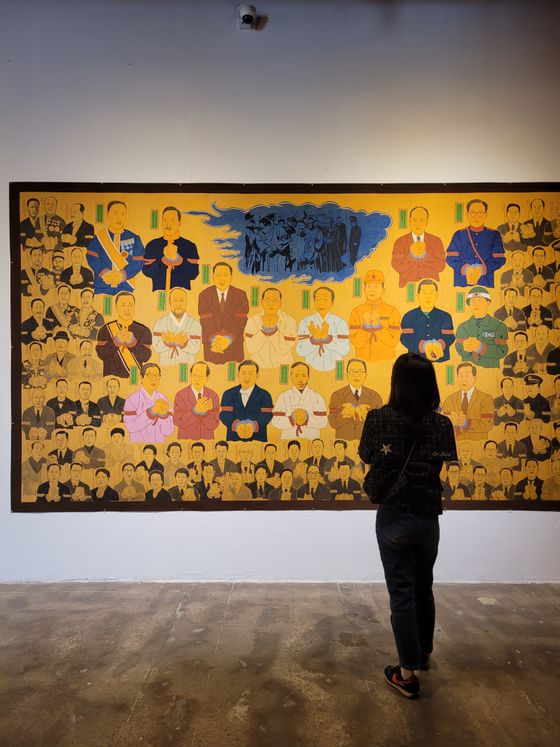 
The problem is visible especially in Gallery 3, which starts with a section dedicated to paintings by Sangho Lee, a Korean artist who belongs to the group of Minjung art, or people’s art, which refers to social realism paintings with political messages which prospered in the 1980s. Lee’s works, which were also designated as one of the 18 highlights, include a large-scale painting that depicts 92 historical Korean figures, who the artist thinks supported the Japanese imperialism ruling of Korea (1910-45), tied up to be punished and a print in which a boy urinates on the American flag as a symbol of yearning for the unification of the two Koreas. The anti-Japanese and anti-American ethnic nationalism with the views that the unification of the two Koreas is the most important task of Korean people and that the United States is the biggest villain that interrupts unification has been an important and useful tool for some Korean political groups to gain power. Is this related with the biennale’s theme “extended mind” or alternative intelligence?

In addition, the paintings of ethnic nationalism that support unconditional unification with North Korea notorious for its totalitarianism and misogynistic, patriarchal social system make grotesque juxtapositions with Vaginal Davis’s work about gender fluidity and LGBTQ culture in the same gallery.

The portraits of Korean female shamanism gods, which are on view with contemporary artists’ feminist works including kinetic works by Liliane Lijn, will impress only those who don’t know much about Korean shamanism. In fact, most mythologies of Korean shamanism are far from being feminist, although most shamans were women, because they were influenced by patriarchal Confucianism in the Joseon period, as seen in the myth of Baridegi, the abandoned princess and paragon of a sacrificing daughter.

Accordingly, interweaving shamanism with extended mind or alternative intelligence, which is also not a very fresh attempt, could be misleading and even another Orientalist approach against the artistic directors’ intention. Visually rich, colorful but poor in the aspect of new discourses are the impression of the 13th Gwangju Biennale’s main exhibition. 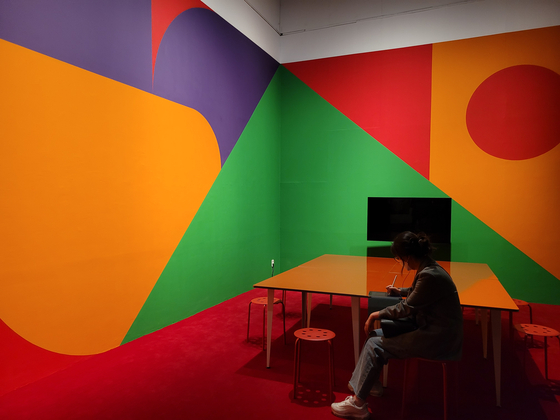 “The Feminist School of Painting,” an installation work by Ad Minoliti. [MOON SO-YOUNG]