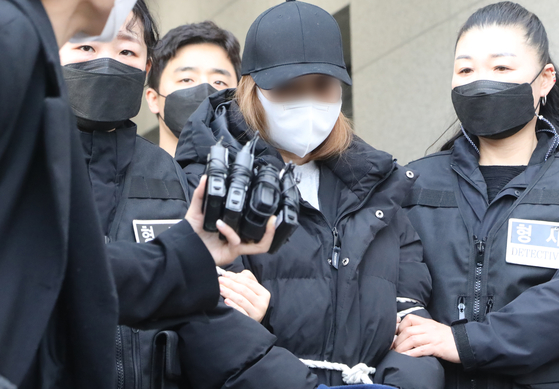 The 3-year-old girl's biological mother, a 48-year-old woman, entering a court in Daegu on March 17 for the hearing on her arrest warrant. [NEWS1]


Prosecutors Monday indicted the 48-year-old biological mother of a three-year-old infant girl found dead after being abandoned in Gumi, North Gyeongsang, even though the police have failed to prove that the woman switched her child with her daughter's.

Although the indictment charges the woman with unlawfully seizing her daughter’s child, police were unable to find direct evidence of a swap before the legal detainment period ended.

By law, prosecutors must serve an indictment within 10 days of a suspect’s arrest, with a maximum extension of 10 more days before the suspect must be released. The 48-year-old was arrested March 17.

Prosecutors’ involvement in the investigation was limited due to the realignment of investigative powers to police last year. Prosecutors may now launch direct investigations into crimes in only six categories: corruption, the economy, related to public officials, elections, defense procurement and large-scale disasters.

Police initially suspected a 22-year-old woman of abandoning her three-year-old daughter last August to die of starvation in Gumi, North Gyeongsang. DNA testing on the corpse showed that the dead child’s real mother was the woman once thought to be her grandmother, who lived in the same house on a lower floor.

According to police, only circumstantial evidence points to a baby swap.

Forensic analysis conducted on the infant’s corpse showed that the dead child had a blood type that would not have been possible if she was the offspring of the 22-year-old woman and her ex-husband. Four rounds of DNA testing confirmed a genetic match with the 48-year-old grandmother, who was really the child's mother. They also conclusively proved it was not the child of the 48-year-old woman's husband.

Crucially, there is no direct evidence, such as closed-circuit surveillance footage, proving that the 48-year-old woman swapped the children.

Without such evidence, the investigation hit a dead end. The older woman has refused to admit bearing a child, let alone swapping babies. Her denials stymied police efforts to locate the 22-year-old woman’s child or to identify the father of the dead child.

The 48-year-old woman’s husband has also denied her being pregnant.

“I see my wife naked and in her underwear,” he told the JoongAng Ilbo on March 26. “Would I really protect my wife if she bore the child of another man and tried to conceal it?”

He also criticized the police’s estimate for his wife’s delivery date, which they believe was in January 2018, three months before the birth of the 22-year-old's baby.

The police's theory of his wife giving birth in January, and then swapping babies three months later, doesn't hold up, he insisted.

“We –– the family and the medical staff –– are not idiots. You can’t pass a three-month-old baby for a newborn.”

Besides failing to prove the baby-swapping charge, police face mounting criticism for the way they conducted their investigation.

In their attempts to locate the female child borne by the 22-year-old woman, police conducted raids of 170 maternity wards and gynecology practices in the Daegu and North Gyeongsang region looking for records of pregnancies and births.

Women’s rights organizations argued that such indiscriminate raids could lead to the exposure of confidential medical information about sexually transmitted infections and underage pregnancies.

In their efforts to determine the paternity of the dead child, police also tested more than 100 male acquaintances of the woman, with none proving to be a match.

The only charge for which police have real evidence is the attempted disposal of a corpse. The 48-year-old woman confessed that she put the corpse of the child in a container, but was stopped when a loud wind sounded in the empty flat.

The woman’s husband reported the grisly discovery the next day.

A massacre of civilians is a war crime (KOR)

A massacre of civilians is a war crime