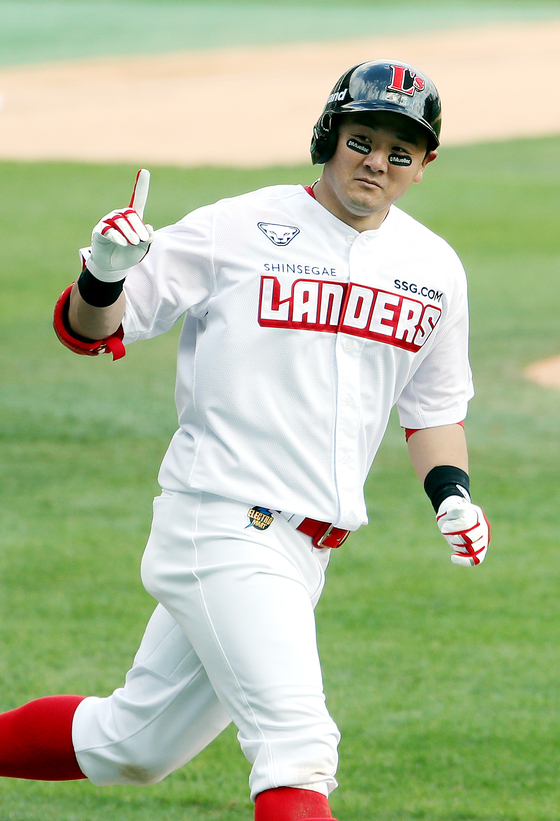 Choi Joo-hwan of the SSG Landers rounds the bases after hitting a home run in the eighth inning against the Lotte Giants at SSG Landers Field in Incheon on Sunday. [YONHAP]


It was a very brief opening weekend for most KBO teams, with only the Kiwoom Heroes and Samsung Lions managing to play two games after rain shut down the action at every open stadium in the country on Saturday. As a result, five teams are currently tied for first as the season gets underway.


The Heroes got things started at Gocheok Sky Dome in western Seoul, Korea's only covered dome, on Saturday, beating the Lions 6-0 for a solid start to the 2021 season. As heavy rain hit the rest of Korea throughout the day, the table was very clear at the end of Day 1: Kiwoom one, Lions zero.

A sunny Sunday brought the rest of the KBO to life, although it didn't do much to help the Lions, who once again fell victim to the Heroes at Gocheon. The Lions got things started early with three runs in the third inning, but the Heroes posted a six-run fifth to solidify their lead once more.

The Heroes added one more in the sixth and the Lions took one back in the eighth, but the damage was done and Samsung had to start the season with back-to-back losses on the road. 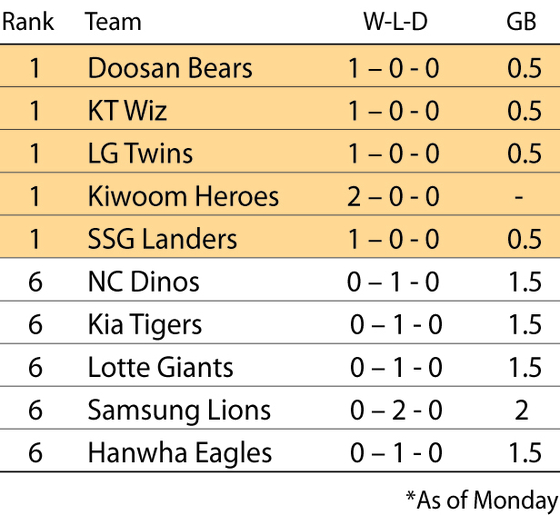 The SSG Landers got off to a strong start at home in Incheon, beating the Lotte Giants 5-3 with an impressive batting performance that saw both recent addition Choi Joo-hwan and Choi Jeong pick up two home runs each to both finish the game with a .750 batting average.


The Doosan Bears appeared to be back on form over at Jamsil in southern Seoul, beating the Kia Tigers 4-1, with a three-run homer from Park Kun-woo and an RBI from free agent returnee Heo Kyoung-min.

The LG Twins also picked up a win to start the season, beating the reigning champion NC Dinos 2-1 in a close game at Changwon NC Park in Changwon, South Gyeongsang. The Dinos got things started with a solo home run in the first inning from Na Sung-bum, but weren't able to break through again as the Twins slowly fought back with runs in the third and seventh inning.

The final win of the opening weekend went to the KT Wiz, who scraped through with a close 3-2 win over a surprisingly competitive Hanwha Eagles team at Suwon KT Wiz Park in Suwon.

Sun is forecast across the peninsula until Friday, so the KBO's midweek schedule should go ahead as planned.

The Lions will continue their stay in Seoul, facing the Bears at home in Jamsil. The Eagles will head to Incheon to face the Landers and the Giants will face local rivals NC down in Changwon. The Twins head to Suwon to face the Wiz and the Tigers continue their run on the road against the Heroes in western Seoul.