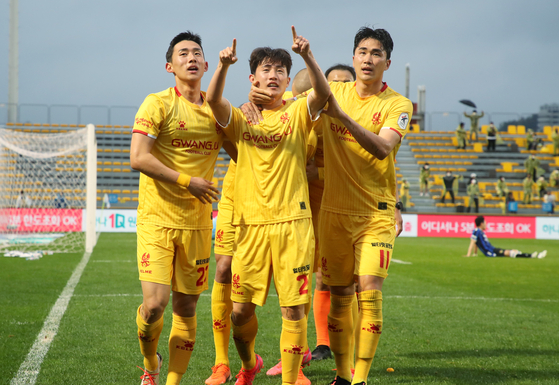 Lee Heui-Kyun, center, celebrates after scoring the winning goal for Gwangju FC during injury time at the end of the second half. Gwangju beat Incheon United 2-1 at Gwangju Football Stadium on Sunday.[YONHAP]


Jeonbuk Hyundai Motors and Ulsan Hyundai FC were the only two of the top four teams in the K League 1 to walk away with a win over the weekend, Jeonbuk beating the Suwon Samsung Bluewings 3-1 on Saturday at Suwon World Cup Stadium in Suwon, Gyeonggi and Ulsan beating Seongnam FC 1-0 at Tancheon Sports Complex in Seongnam, Gyeonggi.

There was some drama lower down the table as well, as both Gwangju FC and Suwon FC managed to score last minute goals to win their games.

Sparks flew during the match between Jeonbuk and the Bluewings due to controversy surrounding midfielder Paik Seung-ho’s recent move from the Bluewings to Jeonbuk.

Although Paik did not play, Bluewings fans were quick to make their feelings known with jeers and banners targeting Paik as a traitor despite the support he had from the Suwon club as a youth player.

Despite the drama, Jeonbuk walked away with a 3-1 win with Choi Bo-kyeong scoring the first goal twenty minutes into the first half, followed by two goals in the latter half of the game from Stanislav Iljutcenko and Modou Barrow. Yeom Ki-hun of the Bluewings managed to score a goal in the last minute but the damage was already done.

Suwon FC struck their first win this season, a 2-1 victory over Jeju United at Suwon Sports Complex in Suwon, Gyeonggi, on Sunday.

The rivalry between Suwon and Jeju was fierce from the start.

Suwon striker Lars Veldwijk received a pass from Murilo Henrique in the box and sent the ball into the net with his right foot. The referee initially called the goal off-side, but was corrected by the VAR.

Thirteen minutes into the second half, Jeju also scored its first goal as Joo Min-kyu’s header found its way into the net.

Suwon’s Cho Yu-min managed to prevent the draw with a late goal in the last minute of the second half.

The league will return on Tuesday when the Steelers take on Jeonbuk and Daegu take on Seongnam.

On Wednesday, Ulsan will take on Seoul, Jeju will face Gangwon, Incheon will play the Bluewings and Gwangju will take on Suwon FC.