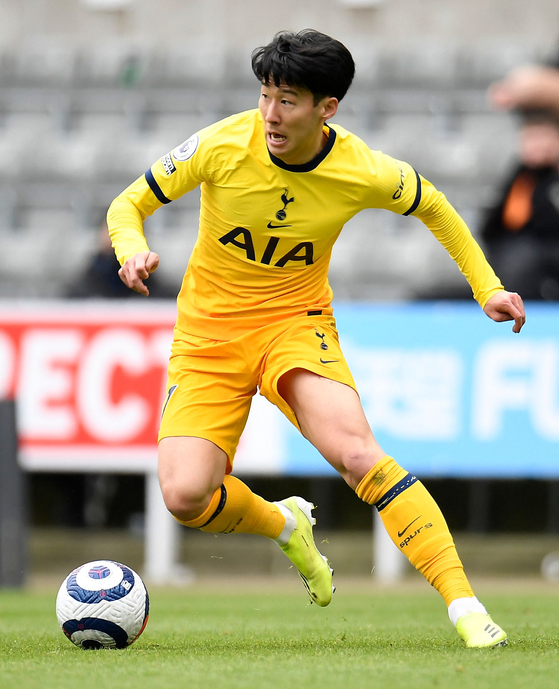 Tottenham Hotspur's striker Son Heung-Min is on the ball during the Premier League football match between Newcastle United and Tottenham Hotspur at St James' Park in Newcastle-upon-Tyne on Sunday. [AFP/YONHAP]


Son Heung-min's return to the Tottenham Hotspur lineup on Sunday may have been quieter than he might have wanted, but it's still good news for the team and fans — Sonny's back.

Son came on as a substitute in the 46th minute of Spurs' 2-2 clash with Newcastle United at St. James' Park in Newcastle on Sunday, replacing Carlos Vinicius.

The score was 2-1 to Tottenham when Son started, with Joelinton having started the scoring for Newcastle in the 28th minute and Spurs' captain Harry Kane quickly equalizing in the 30th minute before adding one more in the 24th.

Despite a series of chances in the second half, Spurs were unable to add any more to the score as an increasingly desperate Newcastle finally found an opportunity in the 85th minute, when a cross into the Tottenham box found two different heads before it landed at the feet of Joe Willock for the goal.

Son's addition had little impact on the game — he didn't record a single shot in his 45 minutes on the pitch — with Kane responsible for nearly the entire Tottenham offense. But just the fact that he was able to return for a full 45 minutes is a big plus for the London club.

Son has missed all club and international fixtures since he suffered a hamstring injury during Spurs' North London derby against Arsenal on March 14, pulling up while on the run in the 18th minute holding his leg. Tottenham quickly sent their medical team onto the pitch and after a brief attempt to walk it off, Son was taken off and headed straight down the tunnel.


Since then, Son has missed two club games — Spurs crashed out of the Europa League with a humiliating 3-0 loss to Dinamo Zagreb on March 18 and picked up a 2-0 victory in the Premier League against Aston Villa on March 21.


He was also absent when the Korean national team, which Son normally captains, struggled to a crushing 3-0 loss against Japan on March 25.

Having scored 17 goals with 14 assists in 39 games across all competitions so far this season, Son's return to the Spurs lineup is a big boost for the club, even if he's not quite back at full form just yet.

The return of the Son-Kane partnership will also excite football fans, as the duo have already collaborated on enough goals this season to set a new Premier League record with 14 goals in a single season.

Son and Kane are now only a few goals away from officially becoming the greatest goal-scoring duo the Premier League has ever seen. The pair have now combined on 34 goals in total throughout their five years playing for Spurs together, making them the second-most prolific goal-scoring partnership of all time.


With 34 goals, Son and Kane are now only three goals away from overtaking the all-time top goal-scoring duo, Didier Drogba and Frank Lampard, who combined on 36 goals during their time playing for Chelsea.


On their route to the top, Son and Kane have already overtaken some of the biggest names in Premier League history.


Coming in at No. 3 with 29 goals during their time at Manchester City are David Silva and Sergio Aguero, tied with Robert Pires and Thierry Henry, who combined on 29 goals for Arsenal. Rounding off the top five are Spurs' legends Darren Anderton and Teddy Sheringham, who scored 27 goals together.


Of those top five duos, Son and Kane are the only ones still active and playing together, meaning that if they're able to make it to the top, they're likely to hold it for some time.

With the Korean striker now back on the pitch, Son and Kane can get back to focusing on their bid to enter the Premier League history books.