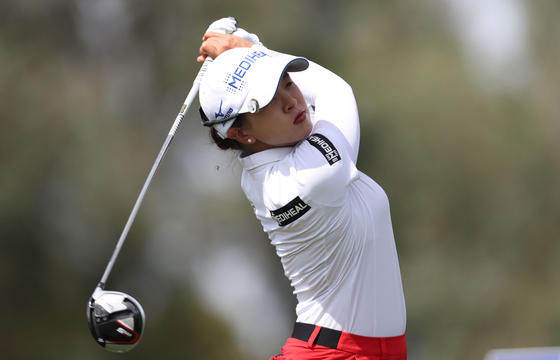 Kim Sei-Young of Korea tees off from the ninth hole during the final round of the ANA Inspiration at Mission Hills Country Club in Rancho Mirage, California on Sunday. [AFP/YONHAP]


A total of four Korean golfers finished in the top 10 at the ANA Inspiration, the first major of the LPGA Tour season, with Thai rookie Patty Tavatanakit running away with the title.

World No. 3 Kim Sei-young topped the table for the Korean golfers, finishing tied for third alongside Nelly Korda of the United States, Nanna Koerstz Madsen of Denmark and Shanshan Feng of China. Lydia Ko of New Zealand took second.

Kim finished the ANA Inspiration at 11 under par, 277, after hitting six under, 66, on the final day. Kim's score improved throughout the tournament, with a 71-71-68-66 spread across the four days.

Further down the table, world No. 1 Ko Jin-young and No. 2 Park In-bee finished tied for seventh with Ally Ewing of the United States at 10 under par. Last year's champion Lee Mi-rim rounded off the top 10 at nine under par.

But despite the strong showing from the Korean golfers, the tournament was dominated by Tavatanakit from day one. The rookie from Thailand finished at 18 under par, two shots ahead of Lydia Ko to become only the second rookie ever to win the ANA Inspiration. Tavatanakit didn't waver throughout the tournament, holding on to her lead from the first round.