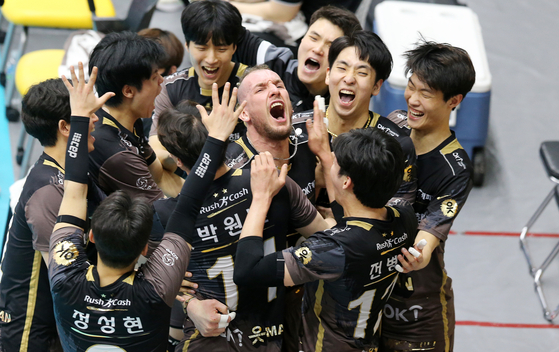 Felipe Airton Bandero of Ansan OK Savings Bank Rush & Cash, center, celebrates with his team after their win in the first round of the playoffs against Uijeongbu KB Insurance Stars at Uijeongbu Gymnasium in Uijeongbu, Gyeonggi on Sunday. [YONHAP]

Led by Felipe Airton Bandero, OK Savings got off to a fast start, taking the first set.

Noumory Keita of KB Insurance struck back hard, scoring a straight 11 points to help KB tie the score at 1-1.

Just as the tide seemed to shift in KB's favor, Suk Jin-wook, coach of OK Savings, came out with an extraordinary incentive during a time-out to encourage his players. Suk told his players that anyone that could pull off a better point celebration than Keita, known for his celebrations, would get 100,000 won ($89) straight out of his pocket.

Suk's offered galvanized the team, and OK Savings came back with a vengeance to win the next three sets to take the game.


Felipe once again took the lead for sets three and four, adding 22 points with only two unforced errors to ensure their victory.

Keita of KB Insurance scored 37 points, the most out of both teams, but it was not enough to stop the OK Savings onslaught.

KB Insurance coach Lee Sang-yeul announced his resignation on Monday, and will be replaced by Hoo In-jung, former coach of Kyonggi University, for the new season.

With the win, OK Savings Bank have earned their ticket to the next round of the playoffs against the Seoul Woori Card Wibees.


The winner of the best of three contest will advance to the championship series against the Incheon Korean Air Jumbos.

The next round of the playoffs will take place at Jangchung Arena, central Seoul, on Tuesday.