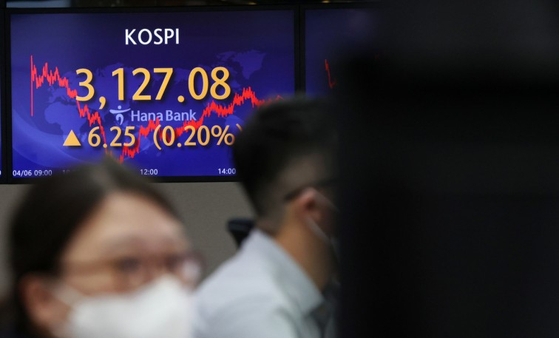 A screen in Hana Bank's trading room in central Seoul shows the Kospi closing at 3,127.08 points on Tuesday, up 6.25 points, or 0.20 percent from the previous trading day. [NEWS1]


Stocks rose for the fourth straight session Tuesday as investors pinned their hopes on a faster-than-expected global economic recovery, backed by strong U.S. economic data. The won rose against the dollar.

Local tech giant LG Electronics, which announced it would exit from the mobile business a day earlier, vaulted 3.56 percent to 160,000 won.

The local currency closed at 1,119.6 won against the U.S. dollar, down 8.1 won from the previous session's close.

Bond prices, which move inversely to yields, closed higher. The yield on three-year bonds fell 2.2 basis points to 1.180 percent, and the return on the benchmark ten-year government bond declined 1.7 basis point to 1.70 percent.