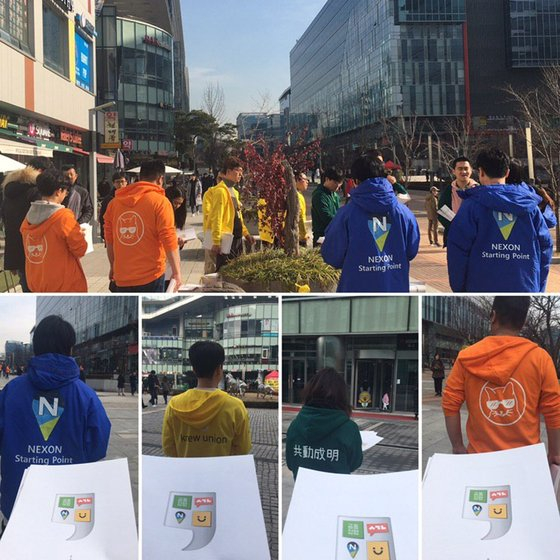 
IT company employees are rushing to establish labor unions as anger builds over low salaries and small bonuses.

During the pandemic, the IT economy has boomed due to strong e-commerce sales and work-at-home requirements. Pangyo Techno Valley, a hub of art and innovative technology in Gyeonggi, IT and game companies are reporting strong earnings.

With bonuses and compensation turning out to be unsatisfactory despite the good performance, employees are forming labor unions to deal with the issue.

Employees at Webzen, an online game developer of MU and R2M, established a union on Monday. This is the fourth labor union to come in the game industry, following unions at Nexon, Smilegate and XL Games.

Webzen announced on March 8 that salaries will be raised by some 20 million won ($17,856). The raise includes increases in base pay and bonuses.

Webzen’s labor union is complaining that the salary increase only applies to executives and certain types of workers, such as developers. 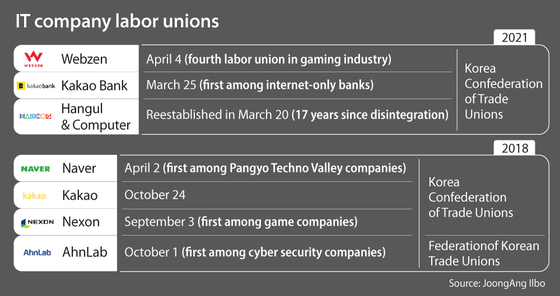 “Despite the IT industry enjoying unprecedented performances and promising better treatment to recruit talented developers, compensation for other employees remains flat, sometimes even lower than last year,” the union said in a statement.

Kakao Bank recorded dismal figures until 2018, but has been doing well since then, according to the union’s statement.

Hangul & Computer established a union on March 23.  The union was revived 17 years after it was disbanded in 2004.

“Despite the company’s long string of surpluses, the employees are exposed to employment instability and poor working conditions,” the Hangul & Computer union said in a statement.

This is not the first wave of labor unions at Pangyo Techno Valley. In 2018, many IT firms established unions, influenced by the 52-hour workweek and heightened awareness of work-life balance.

Nexon was the first game company to form a union. The union was set up to end of the blanket wage system in which employees agree to work overtime under uniform pay. The system was introduced for the convenience of calculating work time for jobs that have irregular working schedules, but a number of businesses have been taking advantage of the system as a means to avoid paying overtime.

Labor unions were not common in IT and game companies as they had fewer employees compared to other industries. Frequent switching of jobs was another reason.

Labor unions are becoming more prevalent in order to cope with growing complaints about bonuses and salaries.

“As part of efforts to secure best talent, companies are drawing up measures to encourage their employees to stay longer," said a source from a game company. “This could also affect the recent trend of forming labor unions."