Staying at home made bearable with lots of wine

Staying at home made bearable with lots of wine 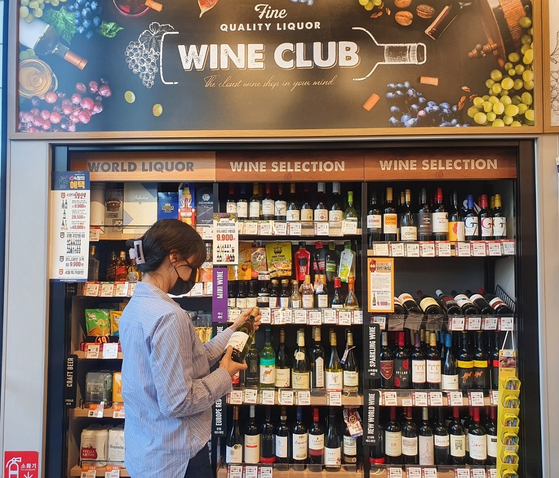 A customer looks at the wine section of an Emart24 convenience store. [EMART24]

Convenience store chain Emart24 sold more than 800,000 bottles of wine in the first quarter alone, up 210 percent on year, while Lotte Mart said its wine sales jumped more than 50 percent during the same period.

While the pandemic has played a major role in boosting wine sales since last year, aggressive marketing by distributors has also played a role.

Brick and mortar retailers consider wine their secret weapon over e-commerce platforms, where only Korean traditional liquor can be sold.

As wine can’t be sold online, “offline retailers are trying hard to [sell] wine because it can attract new customers,” said an industry source. The customer base for soju and beer has already been established, while wine is a new tipple with great potential for growth.

Emart24 on Tuesday said it sold 801,300 bottles of wine from January through March, almost half the 1.73 million bottles the chain sold all of last year.

Emart24 “expects to sell around 3 million bottles of wine this year if the trend continues,” said a spokesperson for the company.
The company said selling various types of wine and its marketing strategies are the primary factors for the boost in sales.

Emart24 operates an online wine club offering information on wine via a mobile app. It recommends an affordable wine every month.

Allowing people to place an order and pick it up at a store is another marketing strategy that has worked, Emart24 said.

The CU convenience store chain sold out 110,000 bottles of newly released Spanish red wine in the 40 days since it was released in January. CU targeted price-conscious customers, setting a price of 6,900 won ($6) per bottle. The company is offering an additional 300,000 bottles this month.

Lotte Mart is targeting price-conscious customers by holding a promotion in which 300,000 bottles of wine are offered at up to 40 percent discounts. The event, running throughout April 14, was planned “as the wine market continues to grow,” according to the company.