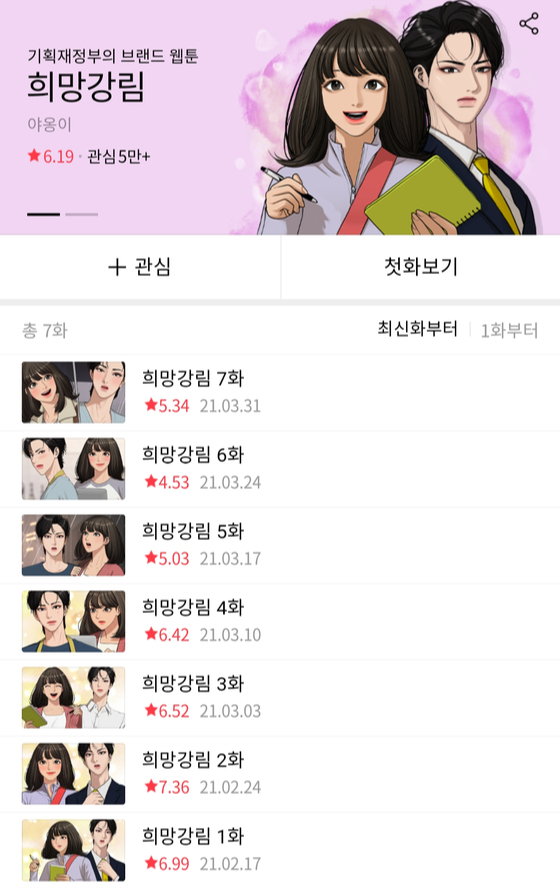 Webtoonist Yaongi's ″Hope is Here″ brand webtoon, funded by the Ministry of Economy and Finance, has been seeing low scores since its first episode on Feb. 17. [SCREEN CAPTURE]


Brand webtoons are webtoon series that are funded by a specific organization to introduce itself or its policies in hopes of approaching the general public in a friendly and fun manner. But as is the case with any promotions or adverts, if care is not taken, best-laid plans go awry.

Usually when a webtoon series gets a low rating, it’s because of low-quality illustrations or how the story plays out. And when it comes to brand webtoons, the bar is even higher, demanding the same standard as a regular webtoon as well as appropriate promotional content which presents itself seamlessly in the narrative.

“Hope is Here” (translated) is an ongoing brand webtoon — typically referred to as brand toon — on Naver Webtoon by webtoonist Yaongi, the famed author behind Naver’s popular series “True Beauty,” who has teamed up with the Ministry of Economy and Finance. It starts with 28-year-old Hyeon I-su who quit her job two years ago in hopes of becoming a writer but has not seen any success. Desperate for inspiration, I-su decides she will write a medical story and heads out to a nearby hospital to interview anyone she can find. The story is set in Covid-stricken 2021 but the characters do not wear masks “to better express them,” according to Yaongi.

Captured scenes from Yaongi's ″Hope is Here″ brand webtoon, funded by the Ministry of Economy and Finance. Main character Hyeon I-su runs into Ju Sang-hyeok for the first time after she bumps into him and falls over, but falls for his good looks. [SCREEN CAPTURE]

Captured scenes from Yaongi's ″Hope is Here″ brand webtoon, funded by the Ministry of Economy and Finance. Male protagonist Ju Sang-hyeok suddenly explains that the finance ministry "aims to overcome the Covid-19 pandemic and put forward progressive policies to lead the economy" while he walks the main character through the rain. [SCREEN CAPTURE]


While in the hospital, I-su runs into Ju Sang-hyeok, a public official from the finance ministry, and falls down after she bumps into him. The next day, she runs into him again at a stadium where an online K-pop concert is being filmed. I-su learns that Sang-hyeok is helping his parents at a cafe that she frequents and the pair begin to fall in love with each other.

The first episode got off to a bad start, with an average rating of 6.99 out of 10 on Feb. 17, and that number has only fallen with the latest episode on March 31 recording an average of 5.35.

While Yaongi’s previous webtoon “True Beauty” saw enough success to be turned into a drama series of the same title on cable channel tvN, readers criticized that the individual scenes seem unrelated to each other and the storyline sways depending on the readers’ reactions. Similar criticism was made in the “Hope is Here” comment section, but in addition, readers also pointed out that the author “doesn’t seem to know what she’s supposed to promote.”

“What on earth is this about? What is it trying to promote?” reads the top comment on the fifth episode with 9,000 likes and 200 dislikes. The top comment on the sixth episode also reads, “It doesn’t seem like the work is casually promoting something. It feels like reading someone who had to rush their homework and they just stuffed everything into one place.” It has garnered 8,000 likes and 100 dislikes.

Undoubtedly, the huge budget for “Hope is Here” makes it more prone to criticism. The finance ministry allocated 190 million won ($170,000) for the series, which includes a 15 million won wage paid to the author per episode. In brand webtoons, while the sponsors — which vary from companies to government ministries to civil organizations — decide what needs to be introduced, it is up to the individual authors to decide how the content will feature. Sponsors often pick which webtoonist they would like to work with, but sometimes asks platform companies to choose for them. 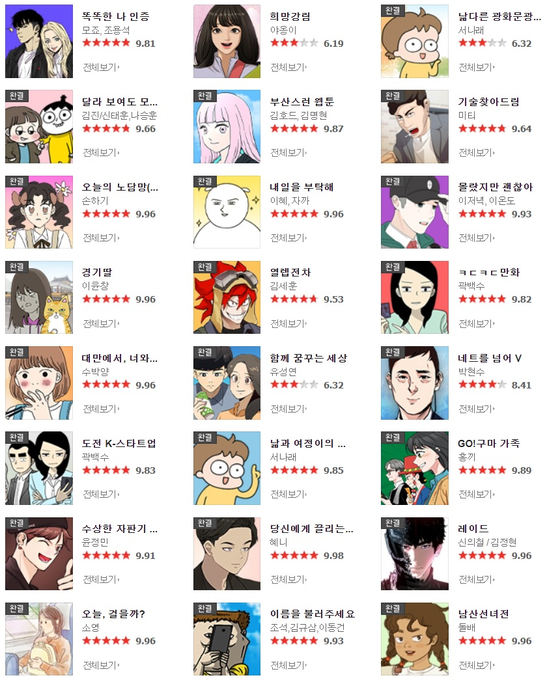 The list of Naver Webtoon's brand webtoons. None have been translated into English. [SCREEN CAPTURE]


The first brand webtoon was published in 2005 and since then, the idea has expanded through the “synergy of content power and platform power,” according to Ryu Yu-hee, a researcher at Hoseo University who wrote the paper, “A Study on the Characteristics of Brand Webtoon in SNS [social network services]” (2020). Brand webtoons go a step further than simply advertising or introducing new products or brands but deliver a certain message through storytelling.

“It means that the same standards apply to brand webtoons as any other works, but they must also fulfill the goal of ‘promotion’ properly,” said an insider who wished to remain anonymous. “Authors are quite open to working on brand webtoons because it’s good money for them, but readers can tell when authors haven’t put as much effort in, in comparison to their previous works. So rather than just accept any job, authors must also think carefully whether they can pull it off or not."

An 8-episode brand webtoon series “Narm’s Gwanghwamun Story” that started in December and ended in January also fell victim to poor reviews and ended with a 4.31 rating on its last episode and an overall average of 6.32. Webtoonist Seo Na-rae, a popular author behind series such as “Narm’s Story,” took the helm of the project which readers criticized because of its "sensitive" topic. 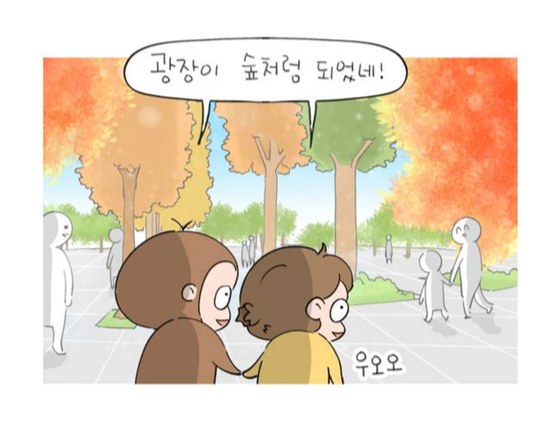 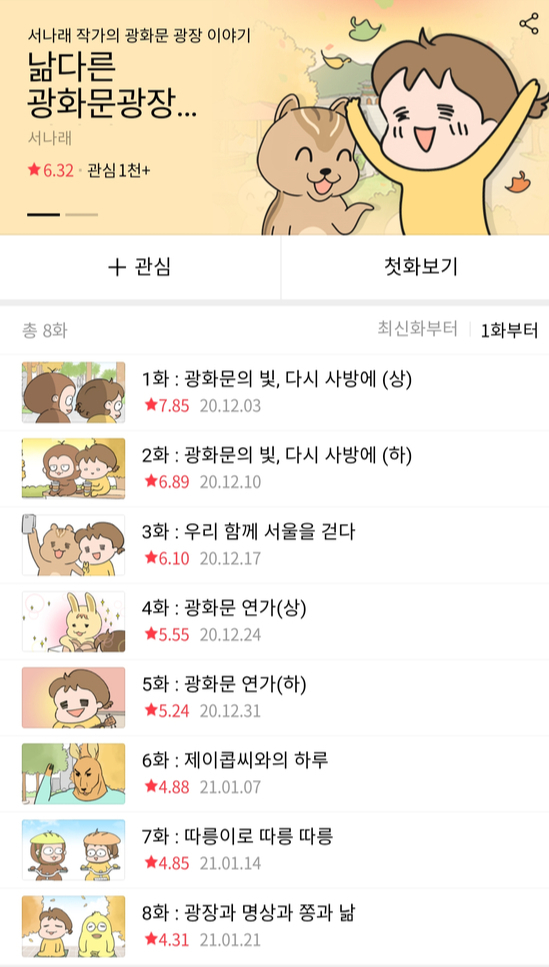 
The “Gwanghwamun” webtoon was funded by the Seoul Metropolitan Government to promote the ongoing Gwanghwamun Square reconstruction in central Seoul. Seoul city started promoting the renovation last year and began work in March. Since then, residents have been complaining of severe traffic congestions in central Seoul. In the last episode of the webtoon, comments read, “Do you like money that much or do you truly believe that this is right?” and “Please, just stop.”

Since brand webtoons are aimed at Korean readers, no work has been translated. Apart from a few exceptions, brand webtoons tend to prove popular, as they mostly feature collaborations with famous webtoonists who have already proved their storytelling abilities. Lee Yun-chang’s “Gyeonggi Daughter” (translated) was funded by the Gyeonggi Tourism Organization and showcased the popular characters from his zombie drama series “My Daughter is a Zombie” traveling around tourist spots in the region and explaining their historical significance. It ended with a 9.96 average rating and comments asking that the series be continued.

But to make sure that a brand webtoon achieves its desired goal, experts say both advertisers and authors must be cautious. Government bodies and corporations who want to benefit from the popularity of webtoons or specific webtoonists should give much thought to the content while webtoonists must take care about how they present the content they are promoting.

“Webtoons have already settled on a genre of content and as it gains more foothold in the industry, people must properly understand how to actually utilize it,” said culture critic Kim Heon-shik. “For instance, the Gwanghwamun webtoon failed because the policy itself was a controversial one, but for the finance ministry, it received backlash because the author was ‘too popular’ and too many eyes were on the work. Both advertisers and webtoonists must make sure they fully comprehend the characteristics of the webtoon as well as what they’re trying to deliver.”