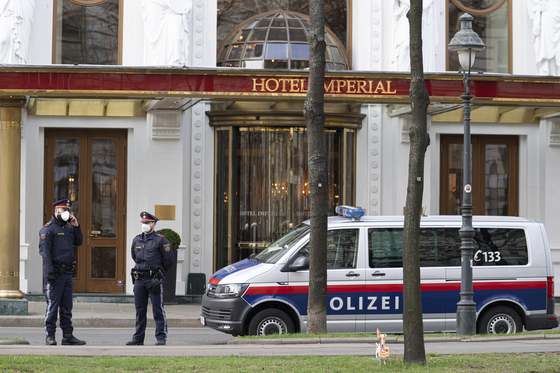 Police officers stand in front of Hotel Imperial where a delegation from Iran is staying in Vienna, Austria, Tuesday, ahead of indirect talks with the U.S. delegation as Joint Comprehensive Plan of Action (Jcpoa) countries aim to revive the 2015 Iran nuclear accord. [AP/YONHAP]


The Iranian government said Monday that it is "positively" reviewing the release of the seized South Korean oil tanker and its captain detained since early January, a possible indication that the two sides are nearing an agreement on what to do about Iran’s frozen funds in Korea.

Saeed Khatibzadeh, a spokesman of Iran’s Foreign Ministry, said that such a trip can “help improve relations,” but Chung should come with “full hands” and “practical solutions.”

He also said that, per request of the Korean government, an investigation into the seizure of the Korean tanker has been conducted in a way that is helpful to the vessel and the captain, noting that he has no criminal history.

The MT Hankuk Chemi, which was en route to the United Arab Emirates from Saudi Arabia with 20 crew members, was seized by Iran's Islamic Revolutionary Guard Corps in the Persian Gulf on Jan. 4.

Iranian authorities blamed chemical and environmental pollution issues for the ship's seizure, accusations rejected by the operator of the vessel and protested by the Korean government.

Observers read the seizure as Tehran pressuring Seoul to unlock assets worth some $7 billion held in the Industrial Bank of Korea and Woori Bank since September 2019, when U.S. sanction waivers for Korea's imports of Iranian oil expired.

The Iranian government in a Twitter post Monday wrote, “The issue of Korean ship is quite separate from bilateral relations. All investigations have been made in line with helping the vessel.”

It added that the Iranian Foreign Ministry “has made all its suggestions to the judiciary, and the judiciary has so far taken a positive approach.”

The statements came on the eve of indirect talks between U.S. and Iranian delegations in Vienna Tuesday on efforts to revive the 2015 nuclear deal.

A Korean diplomatic source last Friday said that Iran could release the ship and its captain soon, pointing to considerable progress in negotiations that have spanned three months.

After talks with Seoul officials, Iranian authorities in early February agreed to set free all sailors except for the captain, continuing its legal case against the vessel and its captain.

Not all sailors could be released immediately because of the minimum crew needed to operate the tanker. Currently, 14 sailors remain in Iran — five Koreans including the captain, six Burmese, two Vietnamese and one Indonesian.

“We sincerely look forward to announcing the good news of the release of the seized Korean vessel soon,” said Choi Young-sam, spokesman of the Korean Foreign Ministry, in a briefing in Seoul Tuesday. “The resolution of the vessel issue, which has been a huge burden on bilateral relations, will be an important opportunity for the development of Korea-Iran relations."

Prime Minister Chung is expected to visit Iran as early as next week to discuss the release of the vessel, among other bilateral issues. According to the prime minister’s office, the two sides are working to arrange a meeting between Iranian President Hassan Rouhani.

The Korean government has suggested the use of the Swiss Humanitarian Trade Arrangement, a channel established last year to bring food and medicine to Iran despite U.S. sanctions, to resolve the frozen assets issue.

The Joe Biden administration has also been working to revive the 2015 Iran nuclear deal, though Tehran has been voicing its skepticism toward Washington.

In May 2018, the Donald Trump administration withdrew from the Joint Comprehensive Plan of Action (Jcpoa), signed in July 2015 by Iran, Britain, France, China, Russia, Germany and the United States, under which Tehran agreed to curb its nuclear weapons program in exchange for a lifting of sanctions.

U.S. Special Envoy for Iran Robert Malley led a U.S. delegation for indirect talks with Iran in Vienna Tuesday with the five other Jcpoa countries acting as intermediaries as they push for Tehran to return to full compliance.

However, Iran’s Foreign Ministry said Monday it wants the United States to lift all sanctions imposed by the Trump administration and rejected a “step-by-step” easing of restrictions.