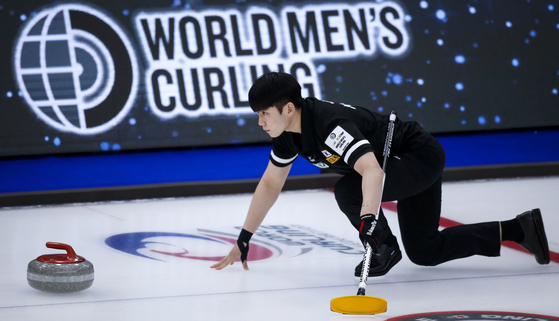 
It's been three years since Team Kim shocked the curling world with its silver medal at the 2018 PyeongChang Olympics and Korea is back at it again.

This time it's a men's team led by Jeong Yeong-seok that has caused the upset, defeating the world No. 4 Canadian squad at the 2021 World Men's Curling Championship on Monday in Calgary, Canada.

The rookie Korean team — skip Jeong, Park Se-won, Kim Jeong-min, Lee Jun-hyung and Seo Min-guk — defeated the curlers from Alberta, Canada, with 10 points to nine to take their first win of the tournament.

Team Jeong entered the tournament as underdogs, ranked at No. 225 on the World Curling Federation ranking. The Korean team has never competed at a world championship and lost their first five match-ups at the tournament, conceding 40 points and scoring just 13.

Prior to facing Canada, Korea lost to Italy, Russia, Norway, Scotland and Denmark. The team started to bounce back on Sunday, picking up an unexpected 5-4 win over the world No. 28 Netherlands team led by Jaap van Dorp before going on to beat Canada the next day.

Bottcher, a former youth world champion, and his team beat the reigning Olympic champion American side led by John Shuster earlier on Sunday, but then fell victim to the dark horse Korean squad who surprised the Canadian team with an unexpectedly strong showing on the ice.

"They made a lot of shots in the first half of the game and they earned their lead," Bottcher told Canada's CBC. "They thoroughly outplayed us."

Korea struck early, scoring three points in the first end to take an early lead. The two teams then swapped points for a couple of ends before Korea struck again in the fourth for two points.

With Korea taking a 6-1 lead in four ends, Canada started to fight back, adding six across the next four ends while Korea only managed to add two to take the score to 8-7 with eight ends played.

Canada took the lead in the ninth end, taking the score to 9-8, but Korea fought back in the tenth, recording two points to win the game 10-9.

While the win is a considerable feather in Jeong and the team's cap, it's unlikely to have much impact on their overall position in the tournament. Korea were tied for seventh with two wins and five losses alongside Denmark as of press time. Norway, at No. 1, have five wins and one loss.