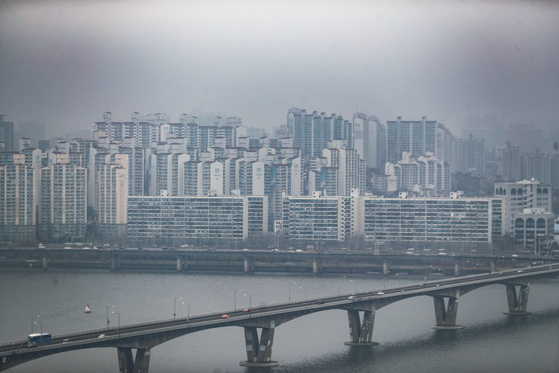 Views of apartments in Seoul on March 28. The government saw incresae in taxes collected in the first two months thanks to active real estates transactions earlier this year. [YONHAP]

But the government still faces a growing deficit after it tried to spend its way out of the Covid-19 pandemic.

According to the Ministry of Economy and Finance on Wednesday, total income for the government, which is more than 50 percent tax collections, amounted to 97.1 trillion won ($87 billion) in January and February, 25 percent or 19.4 trillion won more than in the first two month in 2020.

The government said the increase owed a lot to real estate transactions. Income taxes, which includes the capital gain tax on profits made on real estate, grew 25 percent or 4.8 trillion won in the first two months to reach 23.8 trillion won.

Income taxes account for 41 percent of all tax collections, the largest category.

Between last November and the end of February, the government collected 1.4 trillion won in comprehensive real estate tax, a property tax on apartments with assessed values exceeding 900 million won.

Aside from taxes, government income grew thanks to investments, including by the national pension system, which is Korea’s largest institutional investor.

Government-owned investment funds earned a profit of 31.2 trillion won, a 28 percent or 6.9 trillion won increase over a year earlier.

However, the government recorded a 12.7 trillion won deficit in the first two months of the year.

The spending was focused on supporting small businesses heavily affected by social distancing restrictions during the pandemic.

This spending could grow further as the government passed a near 15 trillion won supplementary budget last month.

As of February, debt owed by the central and local governments amounted to 853.6 trillion won, a 4.2 percent year-on-year increase. The increase largely resulted from the issuance of government bonds used to fund Covid-19-related programs.