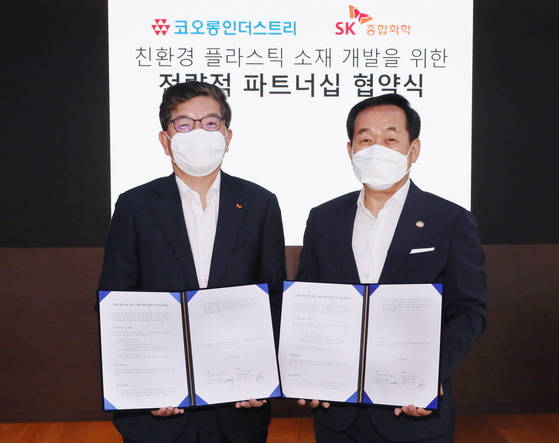 The two companies signed an agreement Wednesday to partner in the business to sell “polybutylene adipate-co-terephthalate (PBAT),” one of the most well-known types of ecofriendly plastics.

Buried in soil, 90 percent of PBAT material naturally degrades within six months. In our daily lives, they are already used in products that can’t be reused, like disposable garbage bags.

A more widely used type of ecofriendly plastic is polyactic acid, but it requires procedures to degrade it, whereas PBAT does not, SK said.


PBAT has immense potential for wider usage as it can be mixed with other types of plastic.

Both ranked among Korea’s top players in the petrochemical industry, Kolon and SK have been jointly working on developing PBAT since last year.

With years of experience in polyester products, Kolon Industries will be leading the development of PBAT material and its mass production. SK Global Chemical will take charge of sourcing raw material and post processing, which refers to the last step of manufacturing where the plastic will be cut according to usage and packaged for delivery.

According to SK, it is the only company in Korea that can supply PBAT material.

“The plan is to release our first prototype, receive necessary approval [from government offices and customers] and obtain a patent by the year’s first half and start mass production from the second half,” said Kolon in a Wednesday statement.

“The goal is to increase capacity for PBAT production to 50,000 tons a year by 2023 so that we could preemptively respond to market needs for ecofriendly plastic.”


The market outlook for PBAT demand is bright, the companies said, considering the number of governments pushing to reduce consumption of disposable plastic.

PBAT is only the start of the Kolon and SK’s partnership in ecofriendly plastic, the companies said. Among other collaborations being considered are finding ways to mix plastic waste in recycled products or developing technology to biodegrade plastic that was not originally made to be ecofriendly.