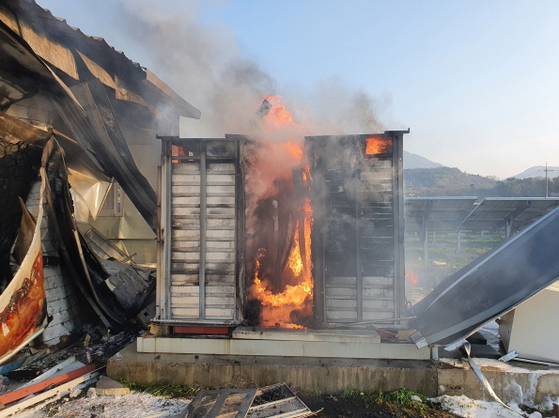 
A fire broke out Wednesday afternoon at a solar energy facility in central Korea, destroying all 140 units of its energy storage system (ESS).

According to South Chungcheong firefighting services, the blaze began at a privately-owned building at around 4:49 p.m. in Hongseong, South Chungcheong, burning down a one-story-tall metal storage structure.

The fire burned for three hours and 45 minutes before 69 firefighters dispatched to the scene succeeded in extinguishing the flames.

Although no fatalities or injuries were reported, the loss of property including the batteries is estimated to reach 440 million won ($393,000).

The ESS installed at the facility were manufactured by LG Energy Solution, the company confirmed.

The company is a major player in the electric vehicle battery market, where it has been locked in a decade-long patent dispute with SK Innovation.

Police and the firefighting services currently believe the fire started inside the storage facility and are trying to determine the exact cause.