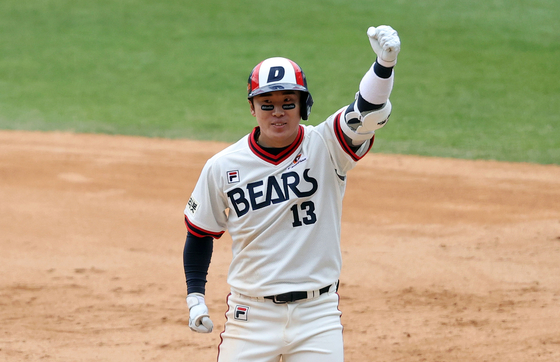 
The Doosan Bears don't often reach for their wallet during the offseason, choosing to develop new talent rather than investing heavily in the free agent market. This year the Seoul club broke that tradition, forking out to keep four of seven free agents including signing infielder Heo Kyoung-min to a huge 8.5 billion won ($7.8 million) four-year deal.

That decision is already paying dividends — after the first two games of the season, Heo had a 0.625 batting average with five hits and an RBI in eight at bats.

The Bears moved quickly to re-sign Heo, considered one of the biggest catches in the free agent market last year, when the window opened. Th club signed a four-year deal with an option of an additional three years at a maximum 8.5 billion won. Heo’s contract for the first four seasons, from the 2021 to 2024 season, will see him receive a total of 6.5 billion won — a 2.5 billion won signing bonus and 4 billion won in guaranteed salary.

This was big news for a club that typically stays on the edge of the FA market. Doosan has previously lost big names like Yang Eui-ji, now of the NC Dinos, and Min Byung-hun, now of the Lotte Giants, to clubs more willing to splash out on proven talent.

Over in Incheon, Choi has got off to a flying start with the Landers, picking up four hits, three home runs, three runs and four RBIs in seven at bats for a .571 batting average, as of press time Wednesday. Oh has missed the start of the season with an injury.