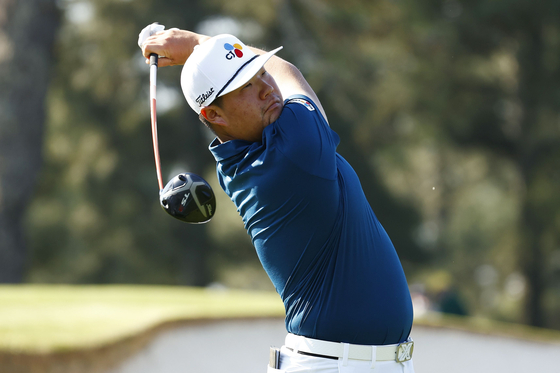 Im Sung-jae plays his shot from the third tee during a practice round prior to the Masters at Augusta National Golf Club on in Augusta, Georgia on Tuesday. [AFP/YONHAP]


Im Sung-jae and Kim Si-woo are both looking for glory as the PGA Tour heads to Georgia for the Masters Tournament on Thursday. No Korean has ever won the Masters, but Im has got the closest — finishing tied for runner-up in his debut last year.


Im, the highest-ranked Asian golfer on the PGA Tour at No. 19, got off to a strong start last year at Augusta National Golf Course in Augusta, Georgia, threatening eventual winner Dustin Johnson in his first ever shot at the Masters Tournament. This year, Im is hoping to do one better.

“Last year at the 5th hole, I was just one behind Dustin which made me think at that point ‘I could really win today,’" Im said in a pre-tournament interview. "Unfortunately, I finished runner-up but this was an incredible result for me in a major. With that performance, I think I’m certainly competitive enough to win major tournaments in the near future.”

Im enters this year's Masters Tournament in strong form, with two top-10 and four top-25 finishes this season. Riding on that momentum, Im is hoping to beat out the competition at this year's tournament, although he'll settle for another top-10 finish.

“I played very well last year, and I hope to play the same this week," Im said. "I hope I can make another top-10 or get near the top this week. Augusta National’s greens are so fast and they have big slopes and I need to set my strategy right to be in the best positions. Course management will be important."

Im isn't the only one looking for a green jacket at the Masters. Kim, the Korean golfer with the second-most PGA Tour wins ever after K. J. Choi, is looking forward to some crowd support as he returns to the Masters this year as a limited number of fans will be allowed onto the course for this year's tournament.

“We have played without fans over the last few months," Kim said. "When I hit good shots and made good putts, I couldn’t get motivated and get my energy up because I didn’t hear any loud cheering. But now, with some fans coming back, we get a lot more cheers. I think it gives me added motivation and energy. I think it's really good for me."

Kim, who earned his spot at the Masters after winning The American Express in January this year, is looking forward to some good competition at this year's tournament.

“Competing with good players is the reason why I play golf," Kim said. "There is pressure and excitement. It will be good to compete well with other talented players."

Kim will tee of in the seventh group at 9:12 a.m. with Charl Schwartzel of South Africa and Corey Canners of Canada. Im will tee off in Group 27 with Patrick Cantlay of the United States and Matthew Fitzpatrick of England.