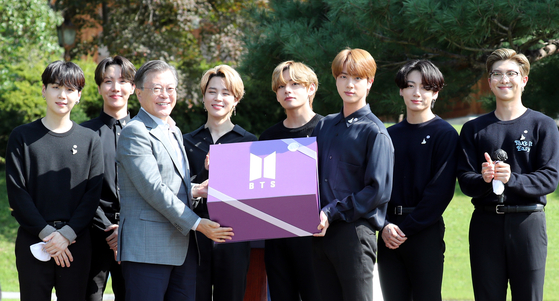 
The Korea Music Content Association (KMCA) filed an official complaint to the Ministry of National Defense on the amendment to the Military Service Act which will enable K-pop acts that have been awarded decorations for cultural merit to postpone their mandatory services until the age of 30.

The KMCA filed the complaint on April 1 calling the amendment "both unrealistic and unfair." The amendment was passed in February and is scheduled to go into effect in June. It will allow pop musicians who have received cultural merits from the Ministry of Culture, Sports and Tourism to postpone their services until the age of 30, with approval from the Culture Minister.

All able-bodied men in the country are required to enlist by 28 at the latest, and though special exemptions existed prior to the revision, they only applied to athletes and classical musicians who won international competitions.

Rep. Jeun Young-gi, who put forward the amendment, cited BTS as the reason behind the move.

According to an official from the KMCA, however, the amendment "clearly means that no musicians [other than BTS members] will be eligible and is merely a taunt" when reviewed in detail.

Only musicians with over 15 years in the industry can be awarded cultural merit and the average age of musicians who have been awarded is over 60 years old. BTS was awarded the Order of Cultural Merit by President Moon Jae-in in 2018 as an exception for its record-breaking footsteps despite having only debuted in 2013.

"So if a male musician would want to meet the criteria before he turns 28, he has to begin his K-pop career when he's 13 years old at the latest," said KMCA. "And that doesn't even mean that they can defer their services. That's only the requirement to apply for the merit. There's a separate set of standards to see whether they actually get the chance to defer their services."

The KMCA added that the law discriminates against pop music compared with other sectors of business. People who establish start-up companies are eligible for deferral as well as those who are doing undergraduate or graduate studies abroad.

"We are not blindly saying we want lower standards," said the KMCA official. "The current bars are unrealistically high. How are musicians supposed to meet a criterion that's impossible to achieve? All we ask is that the ministry come up with standards that can be met and fulfilled by musicians, not extraordinary measures that cannot be made."