The Ministry of Foreign Affairs said in a statement that the agreement “is expected to provide the conditions for the stable presence of U.S. forces in Korea and contribute significantly to strengthening the Republic of Korea-U.S. alliance.”

Since September 2019, the two sides struggled to reach agreement through nine rounds of talks and as Seoul rebuffed the Donald Trump administration’s demand that it pay exponentially higher amounts. The previous deal expired at the end of December 2019, which resulted in an unprecedented two-month furlough of 4,000 personnel, or around half the Koreans working for the USFK, from April to June last year.

Jeong and Rapson initialed the tentative agreement at a ceremony on March 18 during a visit by U.S. Defense Secretary Lloyd Austin and Secretary of State Antony Blinken for two-plus-two talks with Korea’s Foreign Minister Chung Eui-yong and Defense Minister Suh Wook.

The Korean Cabinet and President Moon Jae-in approved the agreement Tuesday. The officially signed SMA Thursday will be presented to the National Assembly. It will enter into force after parliamentary ratification, which could come as early as this month.

The 13.9 percent increase for this year reflects a 7.4 percent hike in Korea’s defense budget in 2020 plus an additional 6.5 percent, which covers an increase in labor costs of Korean workers for the USFK, which was an increase for a single year only. Seoul’s payment for 2020 was frozen at 1.0389 trillion won, the same as in 2019.

A 5.4 percent increase is expected in Seoul’s contributions for 2022 in line with its defense budget increase next year.

According to the Korean Defense Ministry’s mid-term defense plans for 2021 to 2025, Seoul expects an average annual military budget increase rate of 6.1 percent. If this figure is applied to the annual increase for the SMA, Korea could expect to pay nearly 1.5 trillion won in 2025, similar to what Trump administration negotiators had demanded last year.

There has been some criticism domestically that Seoul is paying too much, and some analysts note that the inflation rate in Korea in recent years has been much lower than the rate of increase in the defense budget.

Since 1991, the two countries have conducted regular SMA negotiations under the Status of Forces Agreement (SOFA) to decide Korea’s financial contribution for wages of Korean personnel, construction of military facilities within the USFK and logistical support. 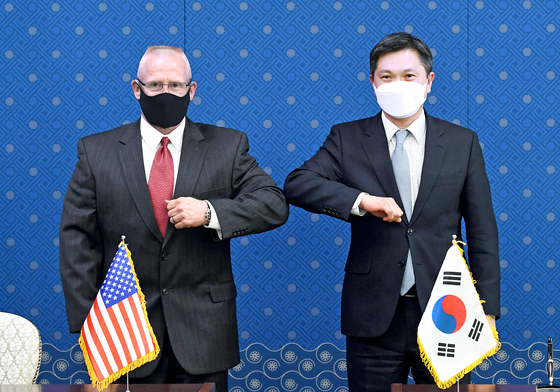