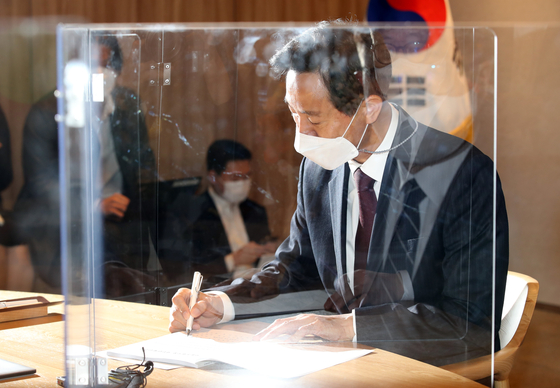 
Seoul Mayor Oh Se-hoon emphasized bipartisan cooperation and the Covid-19 response as he kicked off his first day in office on Thursday.

“The pandemic has brought a difficult time for many people,” Oh told his staffers Thursday morning at City Hall following his visit to Seoul National Cemetery. “The city is back on track, and I promise to do my best for the remaining mayoral term.”

Elected as the mayor of Seoul in the by-election on Wednesday, Oh’s tenure is a year and three months.

But Oh is not a first-time mayor of Seoul. Oh served as mayor of the city from 2006 to 2010. After he was re-elected for his second term in 2010, however, Oh stepped down over the results of a public referendum on free lunches at schools.

Some of the policies put forward during his previous mayorship include architectural projects such as the Sevit Islands by the Han River in southern Seoul and Dongdaemun Design Plaza designed by Zaha Hadid, the 120 Dasan Call Center and converting most public buses in the city to run on compressed natural gas to reduce greenhouse gas emissions.

Oh told the press Thursday that he feels a strong sense of responsibility now that he is back in office.

“I feel a heavy sense of pressure, as city policies impact the lives of everyone in the city’s 25 districts,” Oh told the press Thursday afternoon, adding that he will need active cooperation from the city council.

The council is dominated by members of the ruling Democratic Party (DP), with 101 DP members, six members of the main opposition People Power Party (PPP), and two members of minor opposition parties. Oh is a member of the PPP and represented the opposition bloc in the mayoral by-election.

"The city policies cannot be implemented actively without support from the city council, especially since I am part of the opposition party," Oh told Seoul Metropolitan Council Chairperson Kim In-ho in their meeting Thursday morning. "I hope that we can work together through active discussions, for the betterment of the citizens of Seoul."

Among the first in Oh's agenda as mayor of Seoul is the Covid-19 response.

“The city government in a meeting of bureau directors tomorrow morning will be discussing response measures to Covid-19,” Oh told the press during a visit to a Covid-19 vaccination center in Seongdong District, eastern Seoul, Thursday. “What I see on site at this vaccination center has been encouraging, and we will have to work hard on curbing the current trend of outbreaks in the city.”

Korea has been seeing a rise in its daily cases of Covid-19 infections, with the number rising to the 600s on Tuesday. Korea’s daily cases had mostly been in the 300s and 400s through March.

According to some local research institutes, city administration areas that need immediate attention include employment, housing policies and economic growth.

The city government set apart some 2.1 trillion won ($1.8 billion) in its budget this year for a stimulus package on job growth. Half of it is for direct employment at the city government or other city-run organizations, according to KERI.

Housing prices in Seoul have skyrocketed in recent years. According to Korea Real Estate Board, the average price of an apartment in Seoul surpassed 900 million won in February.

Less people are living in homes they own in Seoul, according to KERI, with the proportion dropping from 44.6 percent in 2006 to 42.7 percent in 2019. Seoul and Incheon were the only two cities out of all cities in the country that showed a drop in this index between 2006 and 2019, KERI said.

KERI added that the new mayor needs to work on boosting economic growth in the city. The average annual growth rate in the country between 2010 and 2019 was 2.89 percent. Seoul’s was 2.37 percent.

“Policies to assist the owners of small stores and restaurants in the long term will be needed, as well as job training to help employees transfer into jobs that will be more lucrative in the future,” KERI said its report.

100 days till election, and Yoon Seok-youl takes the lead in polls