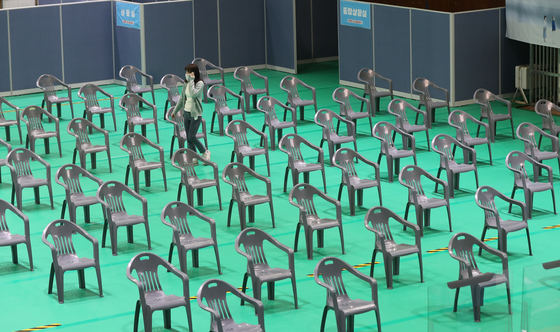 A vaccination center in Gwangju is empty on Thursday, as the government decided to suspend AstraZeneca vaccinations amid concern over some recipients experiencing blood clots. [YONHAP]


Health authorities will announce this weekend whether AstraZeneca vaccines, which have been off limits for people under 60 due to a link with blood clots, will resume.

"We will decide whether to resume the suspended AstraZeneca vaccination this Sunday, after thoroughly reviewing domestic and foreign trends and abnormal reactions," Korea's Covid-19 vaccination task force said in a press release Thursday.

However, based on the European Medicines Agency (EMA)'s reports on AstraZeneca, it is likely that the authorities have already decided to resume vaccination.

"I believe the Korea Disease Control and Prevention Agency [KDCA] will review various blood clot cases and the opinions of vaccine experts and EMA this week and resume inoculations," Health Minister Kwon Deok-cheol said during a press conference Thursday.

"EMA reported that the benefits of getting vaccinated greatly outweigh the risks. I, too, got the AstraZeneca shot with Prime Minister Chung Sye-kyun, but had no problem other than a normal immune reaction," he added.

On Wednesday evening, the government temporarily suspended AstraZeneca vaccination programs for special education instructors and school nurses set to start on Thursday after a third case of blood clotting after vaccination was reported in the country.

A medical worker in her 20s was diagnosed with blood clots in her legs and lungs 12 days after she got her first AstraZeneca jab on March 17.

Other cases of blood clots include one found during an autopsy of a patient in her 60s who died after inoculation and another in a paramedic in his 20s, who was diagnosed with a blood clot in his brain but recovered after receiving treatment.

The EMA announced later Wednesday that there was a "possibility of very rare cases of blood clots combined with low levels of blood platelets" as a side effect of the AstraZeneca vaccine, but reaffirmed that the benefits still "outweigh the risks of side effects" and that continued vaccination is necessary.

Minister Kwon showed confidence in the country's procurement of vaccines, saying the country has secured sufficient amounts and is monitoring the situation through video calls with the vaccine producers.

"There were varying opinions on whether we should secure additional doses even though we already secured enough vaccines, but we decided to secure more just in case," Kwon said.

Kwon added, "We are talking with Moderna and Janssen about securing additional supplies and advancing the delivery schedule. The task force team is thoroughly checking the amount [of delivery supplies] to ensure that the inoculation plan is not disrupted.

"Novavax is a vaccine that SK Bioscience produces by technology transfer. Fortunately we have secured essential subsidiary materials, but we still need the permission [of Britain's Medicines and Healthcare products Regulatory Agency (MHRA).]"

Asked if the country would share with North Korea or other nations if there ended up being a surplus, Kwon said, "We haven't reviewed or discussed it with the Unification Ministry," adding, "It needs social consensus."