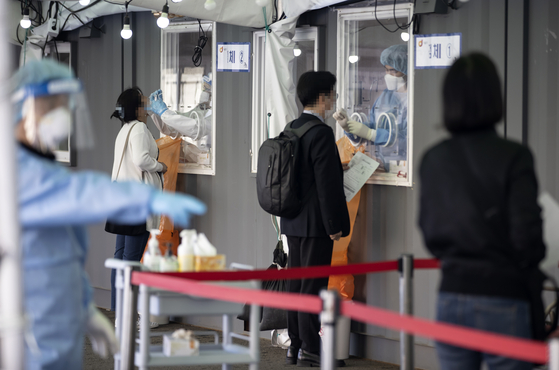 People get tested for Covid-19 at Seoul Station on Thursday, as the number of new confirmed cases soared back up to 700 after three months. [YONHAP]

According to the Korea Disease Control and Prevention Agency (KDCA), Korea added exactly 700 new Covid-19 cases as of Wednesday midnight — 32 cases more than the previous day and the highest daily count since the 869 cases recorded on Jan. 7.

The number of new confirmed cases in Korea has been soaring rapidly as of late. After staying around the 300-400 case range for more than a month, the numbers escalated from 500 to 700 in one week, already passing the criteria for Level 2.5 social distancing guidelines in Korea's 5-tier social distancing system.

Of the new cases, 674 were local transmissions and 26 imported, raising the country's Covid-19 caseload to 107,598. Two more deaths have been reported, bringing the death toll to 1,758 deaths.

The greater Seoul area accounted for 72 percent of the day's total local transmissions with 239 in Seoul, 223 in Gyeonggi and 23 in Incheon.

Twenty-seven people confirmed were tied to an indoor sports facility in Seocho District, southern Seoul, bringing the cumulative number of infections in that cluster to 55.

Nine people were added to a cluster of infections from a police office in Jungnang District in eastern Seoul, now with 12 cases in total.

Serial infections related to a day care center and multi-use facility in Incheon increased to 58, and a cluster from a window manufacturing company in Pocheon, Gyeonggi, increased to a total of 21.

Seven more people have been confirmed infected through Seoul’s Soojeong Church and its branches across the country with the same name, bringing the cluster to 208. The virus infection spread nationwide as members of the church held so-called “healing rallies,” with close physical contact.

A total of 318 people are now confirmed in a cluster from a hostess bar in Busan, and the cram school cluster in Daejeon now totals 72 infections.

Critics pointed out that the government’s recent easing of social distancing restrictions contributed to the spike in infections, to which Health Minister Kwon Deok-cheol responded by comparing the situation to a rubber band.

“If you keep pulling the rubber band, it will be cut off,” said Kwon during a press conference on Thursday.

“The quarantine measures were dealt with according to the situation. If the number of confirmed cases decreased, we lowered the social distancing level or eased regulations — and some industries did not follow the health measures well, which resulted to the recent spike.”

Unlike the sudden rise in daily new Covid-19 cases, the number of patients with serious symptoms was kept relatively stable.

“We first inoculated the high-risk patients in nursing hospitals, and conducted pre-emptive tests for the workers and greatly reduced the number of critically ill patients,” said Kwon. 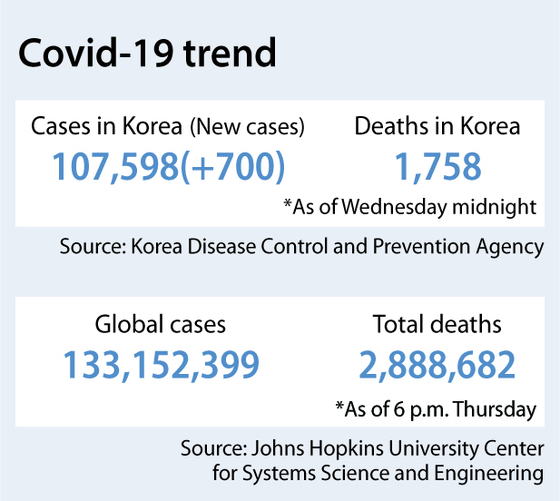 The government will likely strengthen health measures in specific areas, such as entertainment or other high-risk facilities where clusters occurred, rather than uniformly raising the social distancing level.


“Equally raising the social distancing level regulates even the people and industries who followed the measures well,” Kwon said. “This increases fatigue and causes a [significant] impact on the economy. We are considering measures to regulate the areas where infections have occurred recently in particular.”

The adjustment of social distancing measures will be announced Friday and will take effect from April 12.