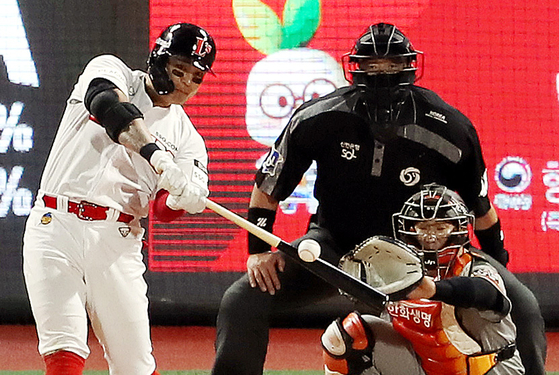 Choo Shin-soo of the SSG Landers hits his first home run in the KBO in the third inning against the Hanwha Eagles at SSG Landers Field in Incheon on Thursday. [YONHAP]


Choo Shin-soo has finally picked up his first hit in the KBO — and in true Choo style, it's a home run.

After remaining silent in his first three games for the SSG Landers in the KBO, Choo finally announced his arrival in the Korean league in style on Thursday, sending a big fly over the fence in the third inning with no runners on base. The homer traveled 115 meters (126 yards) into the right field seats at Incheon SSG Landers Field in Incheon.

Choo joined the SSG Landers earlier this year after playing his entire career in the major leagues. Hit KBO debut on Sunday was quiet, as the MLB All-Star took his time to adapt to the local league.

SSG and the Eagles were tied 4-4 at the top of the sixth inning as of press time.