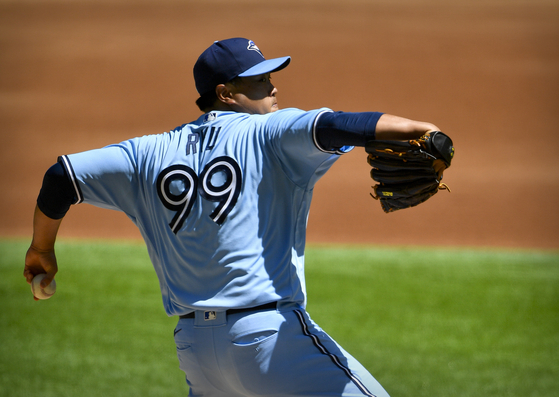 
Ryu Hyun-jin of the Toronto Blue Jays picked up a loss in his second game of the season on Wednesday, giving up two runs to the Texas Rangers at Globe Life Field in Arlington, Texas.

Despite the 2-1 loss, Ryu had a good game on the mound. The Blue Jays ace stayed in the game for a full seven innings, striking out seven and giving up seven hits.

Both of the Rangers' runs came in the second inning. Ryu gave up a solo home run to Nick Solak to start the inning with a fastball over the heart of the plate. With two outs and a runner on second, Ryu then allowed Leody Taveras to loop a curveball over the infield into shallow right to bring home the runner for a second RBI.

With the exception of the second inning, Ryu kept the Rangers shut down, throwing 68 strikes in 90 pitches. The Blue Jays lineup weren't able to offer Ryu much offensive support, however, with the only run of the game coming from a Marcus Semien homer at the top of the eighth.

The loss follows a no decision in Ryu's opening game against the New York Yankees, when the Blue Jays won 3-2 but the runs came after Ryu had left the mound. Although on paper Ryu may have just one loss to show for the season so far, he has only conceded four runs in 12.1 innings for an ERA of 2.92.

"I've been able to limit opponents to under three runs in both of my games so far, and I think I am doing what a starting pitcher is supposed to do," Ryu said in a postgame Zoom session, according to Yonhap. "Things are going much better than last year after two games."