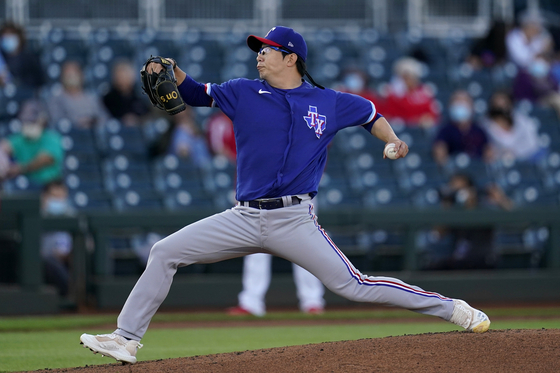 
Yang Hyeon-jong started in an alternate training site exhibition game for the Texas Rangers on Wednesday, striking out three in two scoreless innings. The Rangers lost 3-0 to the Houston Astros.

Alternate training site exhibition games are being held throughout April to allow major league teams to ensure potential players that aren't currently on the roster are on hand and in action in case they are called up.

Normally players are sent to Triple A affiliates for this purpose, but as the minor league season doesn't begin until May this year, alternate site games will fill the role instead. Yang missed out on a spot in the major league roster at the start of the season, but has been traveling with the team in case he is called up.

Yang started for the Rangers alternate side team against the Astros on Wednesday at Dell Diamond in Round Rock, Texas, home of the Astros' Triple A affiliate Round Rock Express. Yang threw two shutout innings with three strikeouts before he was replaced at the top of the third for rehabbing Rangers pitcher Brett Martin.


The Astros scored two runs in the sixth inning to pull ahead, adding one more in the ninth for a 3-0 win over the Rangers.

The actual Rangers squad had a better outing, beating the Toronto Blue Jays 2-1 at Globe Life Park in Arlington, Texas on Wednesday.

Yang could be called up to the major league bullpen at any time.